Until oil no longer matters, our real earnings and our economy remain hostages to the cost of oil.

What matters is if our hourly wage once bought eight gallons of gasoline and now it buys only four gallons. This is called purchasing power, and rather naturally the Status Quo has worked mightily to cloak the reality that our purchasing power of the bottom 95% of wage earners has been declining for decades. More recently, 2011, real median household income was 8.1 percent lower than in 2007.

So even as nominal earnings rise, earnings lose purchasing power.

These charts, courtesy of our Chartist Friend from Pittsburgh, depict the dynamic of energy costs, loss of purchasing power and earnings. The first chart plots hourly earnings and energy costs. 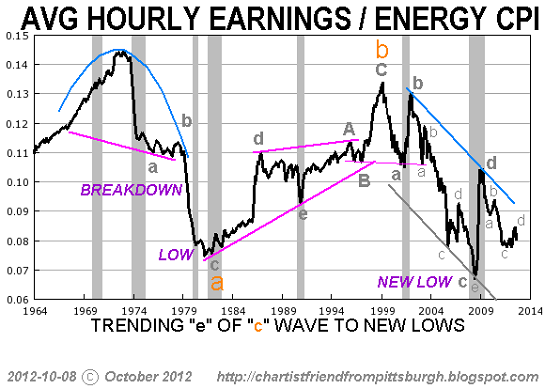 Note that hourly earnings rose smartly in the 1960s era of cheap oil, and suddenly plummeted to a lower plateau after the 1973 oil shock. The next jump in oil (the Iranian revolution) sent earnings to a new low. Recall that each leap in energy costs pushed the U.S. into a deep recession (1973-74 and 1981-82).

As oil costs declined over the next two decades (the exception being the first Iraq War, which triggered the 1991 recession and spiked purchasing-power earnings lower), real earnings rose.

The Internet boom and oil dropping to $15/barrel caused real earnings to spike in 1999. The bubble burst in 2000, causing a mild recession. Earnings subsequently spiked again during the housing/credit bubble, and then plummeted when oil rose to $140/barrel in 2008.

Predictably, that rise in energy costs triggered a deep recession made even more severe by the bursting of the housing bubble. The sharp decline in oil to $35/barrel caused real earnings to spike once again, and then decline sharply as oil returned to the $100/barrel level.

The next chart shows earnings and the entire consumer price index (CPI) that includes all components, not just energy. Once again we see a decline in the era of stagflation, high CPI and the general adjustment of the U.S. economy to global competition and diminishing returns. 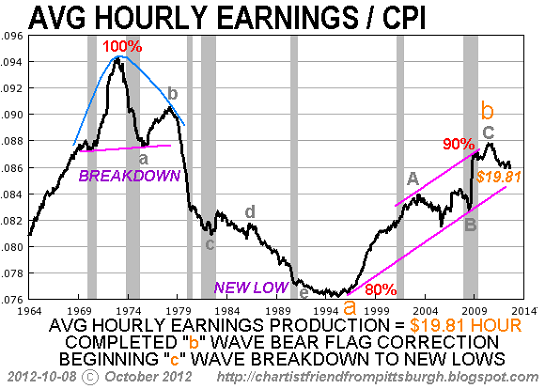 Purchasing-power earnings bottomed in the early 1990s and then rose smartly as inflation declined and the computer/Internet revolution increased productivity (with a boost from rampant financialization).

Interestingly, the credit/housing bubble did not raise real earnings in the 2002-2007 period. What did boost real earnings was a big drop in oil and official inflation and trillions of dollars in "free money" stimulus that essentially doubled the Federal debt in a few years.

Massive injections of borrowed money and the deflation caused by the bursting credit bubble (deleveraging) bumped real earnings higher after 2008, but the cost of energy, medical care, college tuition etc. has continued ever-higher, pushing real earnings lower since the spike of 2010. Recall that the Census Bureau calculated real earnings fell by over 8% from 2007 to 2011.

Next up, a chart of the price of gasoline. 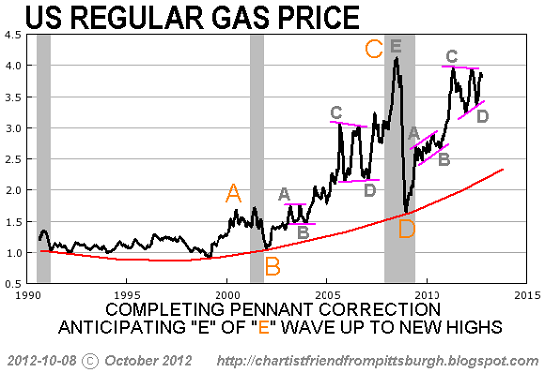 This suggests the price of gasoline is in a secular uptrend, and the recent stabilization in price may give way to higher highs. Since very few of us have natural-gas powered vehicles, any further increase in the price of oil/gasoline will push real earnings lower. If history is any guide, any price increase will also push the U.S. into another "official" recession.

Until oil no longer matters, our real earnings and our economy remain hostages to the cost of oil.


Special offer exclusively for oftwominds.com readers (ends today): Chartist Friend from Pittsburgh is offering a one-month trial subscription to his daily and weekly chart service for an extremely modest $5. Many of you have seen the Chartist Friend from Pittsburgh's insightful charts reprinted in my blog entries. In my view, his charts offer a unique value not found in other's charting systems.

As always, I receive no compensation from this offer.