Federal spending is heading for a fiscal cliff while millions of retirees are starting to draw Federal benefits.

We know two things about the future:

2. The Baby Boom generation of 75+ million may be working longer, but they are also retiring en masse, joining the ranks of Social Security and Medicare beneficiaries at the rate of 10,000 per day, a flood that will not ebb until the late 2020s. (The Baby Boom is generally defines as those born between 1946 and 1964, though many quibble with the 1964 date. The choice of parameter doesn't change anything about the consequences.)

Here are three views of the Baby Boom for context: 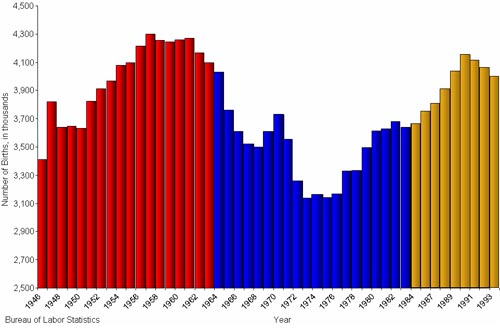 Here is a chart courtesy of B.C. that overlays year-over-year changes in private-sector wages+Federal expenditures, Treasury bond yields and the consumer price index (CPI). Note the downtrend in wages+Federal spending and Treasury yields, and the range-bound CPI. 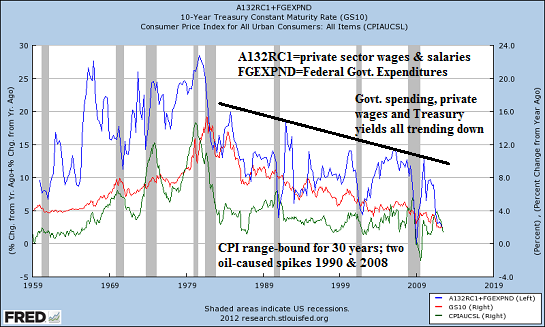 The sum of the year-over-year change rates of wages and Federal spending is deeply into historical recessionary/depression territory. With the demographic drag and fiscal cliff constraints ahead, who knows how slow the rate will be hereafter, and for how long.

B.C. also submitted this year-over-year chart of Federal expenditures. Despite the unprecedented size of Federal deficits, both in dollars and as a percentage of peacetime budgets, the recent spurt of spending growth was lower than previous spikes. 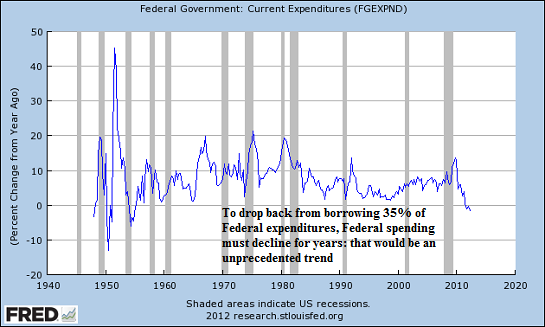 This raises the obvious question: if Federal spending must decline, then where is the money going to come from to fund 75 million retirees? Calling the Central Bank of Mars: Greetings, Martian friends. Please send us 10 trillion quatloos every year from now until 2029. We promise to pay you in 2030 (heh).