It doesnt matter how abundant liquid fossil fuels might be; its their cost that impacts the economy.

Many people think peak oil is about the world is running out of oil."

Actually, peak oil is about the world running out of cheap, easy-to-get oil. That means fossil fuels might be abundant (supply exceeds demand) for a time but still remain expensive.

The abundance or scarcity of energy is only one factor in its price. As the cost of extraction, transport, refining, and taxes rise, so does the cost basis or the total cost of production from the field to the pump. Anyone selling oil below its cost basis will lose money and go out of business.

We are trained to expect that anything that is abundant will be cheap, but energy is a special case: it can be abundant but costly, because its become costly to produce.

In the old days, oil would shoot out of the ground once a hole was drilled down to the deposit. All the easy-to-find, easy-to-get oil has been consumed; now even Saudi Arabia must pump millions of gallons of water into its wells to push the oil up out of the ground. Recent discoveries of oil are in costly locales deep offshore or in extreme conditions. It takes billions of dollars to erect the platforms and wells to reach the oil, so the cost basis of this new oil is high.

It doesnt matter how abundant liquid fossil fuels might be; its their cost that impacts the economy. High energy costs mean households must spend more of their income on energy, leaving less for savings and consumption. High energy costs act as a hidden tax on the economy, raising the price of everything that uses energy.

As household incomes drop and vehicles become more efficient, demand for gasoline declines. Normally, we would expect lower demand to lead to lower prices. But since the production costs of oil have risen, there is a floor for the price of gasoline. As EROEI drops, the price floor rises, regardless of demand.

This decrease in real incomes and ratcheting-higher energy costs could lead to a situation where energy is abundant but few can afford to buy much of it.

The relative abundance of fracked natural gas and low-energy density fossil fuels like tar sands and shale has led to a media frenzy that confuses abundance with low cost. This article (via correspondent Steve K.) illustrates the tone and breezy selection of data to back up the "no worries, Mate" forecast of abundant cheap liquid fuels: An economy awash in oil. (MacLeans)

Not so fast, reports Rex Weyler of the Deep Green Blog. Here is Rex's response to the above article.

The dregs: In spite of huge shale & tar reserve discoveries, peak discoveries remain well behind us, in the 1960s. My father, a petroleum geologist his entire life (and still, in Houston, Kazakstan...), knew about shale and tar deposits when I was a teenager in the 1960s. He called them "the dregs." These deposits are not really news within the oil industry. And they are the dregs because of high cost, low EROI and rapid depletion.

EROI: The volume of these low-net-energy reserves could extend peak oil production for decades, but at fast-declining net energy returned to society. We high-graded Earths hydrocarbons, just as we high-graded the forests, fish, copper, tin, water, and so forth. Weve taken the best, highest EROI hydrocarbons, the 100:1 free-flowing wells of the 1930s and 40s. Were now into the 3:1 and 2:1 tar sands.

For example: damming rivers in Northern BC, to send electricity to the fracking fields, to send shale gas to Alberta, to cook the boreal substrate, and mix the black sludge with gas condensate shipped in from California and by pipeline from Kitimat to Fort McMurray, to mix with the bitumen, to pipe to Vancouver Harbour, to ship to China, to burn in a power plant, to supply electricity to their manufacturing empire.

By the time any of this energy gets used to actually make something useful to someone in society, and by the time that user puts that usefulness to work to feed, clothe, house, or heal anyone, there is no net-energy left.

Our food in North America is already negative net energy by1:10 at best, up to 1:17 or worse for much of the crap we eat. This matters. EROI at well-head, EROI at the consumer pump, and EROI at the point of societys actual service all matter.

Well-head EROI, counting all public subsidies, is now in the 5:1 to 1:1 range for all these non-conventional (meaning the dregs) hydrocarbon deposits. Money can be made. Some energy can be delivered to Society, but this is already way below the well-head EROI that could likely run the current complexity of the human society, much less grow economies.

The degrading reserves take us down along the EROI curve, in which Net Energy returned to society falls off a cliff around 6:1, and is in freefall by 3:1. Net-energy alone kills the idea of much economic growth from a booming hydrocarbon bonanza (other than some great stock plays along the way). Furthermore, depletion renders the idea ever more unlikely:

Depletion: Depletion rates on these gas fields have arrived quickly and appear drastic by historic industry standards. The fracking fields peak early and decline swiftly. In the Bakken shale field  one of the great North American saviour fields  the average well has produced ~ 85k barrels in its first year and then declined at about 40% per year. The newer average wells peak earlier and decline faster, so the overall trend is down.

The Bakken break-even oil price is $85, so there is no profit in any of this right now, but of course there will be if global depletion exceeds demand from crashing economies.

Depletion  both in volume and quality  and depletion for all industrial materials and energy stores, EROI, and economic stagnation all work as feedback loops. No one knows the bifurcation points in this complex system. We try to predict those, but miss by a longshot sometimes. Complex societies crash in this manner, declining returns on investments in complexity, from Babylon to London and Washington. See J. Tainter, H. Odum, N. Georgescu-Roegen, Hall, Cleveland, et al.

Here are some depletion data on The Oil Drum: Is Shale Oil Production from Bakken Headed for a Run with The Red Queen?.

See A Review of the Past and Current State of EROI Data (PDF) by Hall, Cleveland, et al. (source: www.mdpi.com)

There is a lot of EROI data here: Obstacles Facing US Wind Energy. (The Oil Drum)

Below is the EROI curve, only the We are here point at 10:1 is the modern average, and from a few years ago. The new conventional stuff is coming in lower and and the enhanced recovery, shale and tar fields are already over the falls at 6 or 5:1 for the better stuff (best dregs), and 3:1 to 1:1 for the dregs of the dregs, the deeper shale and tar sands. 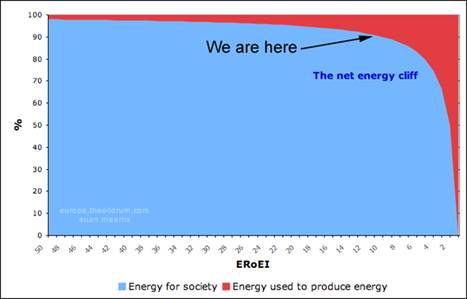 Growing this figure is technically possible, and may happen with some massive production bonanzas, i.e. we may see actual production push above 90mb/day, or higher, and may even see net production increase, but a major glut of hydrocarbons? No. Not remotely.

When settlers first came to North America, they found copper nuggets the size of horses exposed in river beds. China just bought the best known, last, huge, moderate-to-low-grade, strip-minable, high-cost copper field in the world, in Afghanistan, for $billions over the western bids. There will be others, but rest assured: They will be lower grade, higher cost, and the competition will be more intense. When was the last time you bought a copper fitting at the hardware store. Theyre crap. The alloys are crap. Because the ore quality is in decline and the costs of extraction are rising. Same with oil, trees, tin, coal....

Make no mistake: The war for the dwindling materials and energy flow is well underway.

Thank you, Rex, for this commentary on EROI and the quality and cost of hydrocarbon resources. Complex systems like economies are nonlinear, and so history does not necessarily track linear extrapolations of present trends. With that caveat in mind, the preponderance of evidence supports the notion that fossil fuel energy may remain abundant in the sense that supply meets or exceeds demand in a global recession, but the price of liquid fuels may remain high enough to create a drag on growth, employment, tax revenues and all the other economic metrics impacted by high energy costs.