Can Taxpayers Actually Expect a Profit on the Bailout?
(September 29, 2008)


A veritable hurricane of "happy talk" has swept through the Mainstream Media as everyone from President Bush to "gummit bailout and bond king" Bill Gross is talking up the expectation that not only will the bailout eventually cost taxpayers nothing--it will turn a big profit!

All sorts of fantastic claims are being giddily bandied about by "experts" such as Mr. Gross (ahem, isn't it these self-styled "experts" who apparently saw no risk in a decade-long credit bubble until two weeks ago?) that taxpayers can purchase distressed assets at somewhere between "mark to maturity" (i.e. the full value of the mortgage if it was paid off in the future) and "mark to market," (i.e. a horrible, terrible ghastly "fire sale" price which an investor might offer at open auction).

Commentators such as John Mauldin are basically whining that bundled mortgage bonds (mortgage-backed securities) are selling for far less than their "real value":

Last week, I wrote about a formerly AAA-rated residential mortgage-backed security (RMBS) composed of Alt-A loans, better than subprime but less than prime. About 5% of the loans were delinquent, and there are no high-risk option ARMs in the security. It is offered at 70 cents on the dollar. If you bought that security, you would be making well over 12% on your money, and 76% of the loans in the portfolio of that security would have to default and lose over 50% of their value before you would risk even one penny. Yet the bank which is being forced to sell that loan has had to write down its value. As I wrote then, that is pricing in financial Armageddon.

The bank is offering the bond at $.70 because it knows there is quality in the security. They are being forced to sell. And guess what? There are no buyers. An almost slam-dunk 12% total-return security with loss-coverage provisions that suggest 40% of the loans could default and lose 50% before your interest rate yields even suffered, let alone risk to your principal  and it can't find a buyer.

Rather than bemoan the lack of ready buyers and talk up what a "great deal" this RMBS is, perhaps Mr. Mauldin should consider the awkward realities which might be causing buyers to avoid such "investments", starting with the fact that the mortgages ultimately rest not on paper but on real, physical properties such as these: 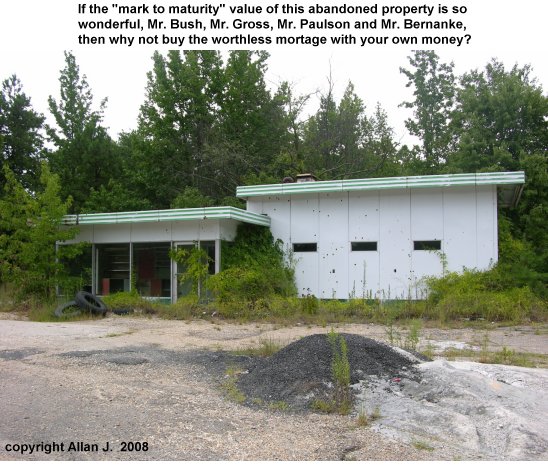 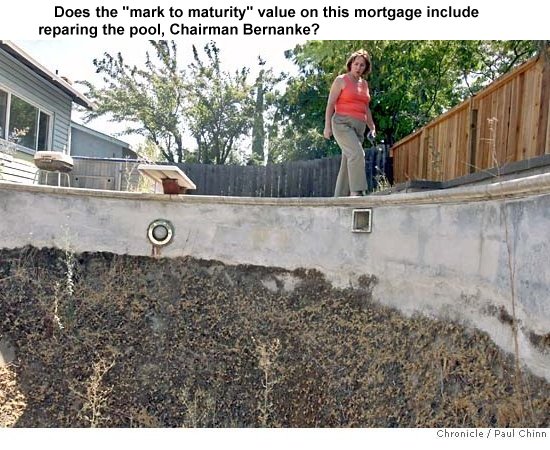 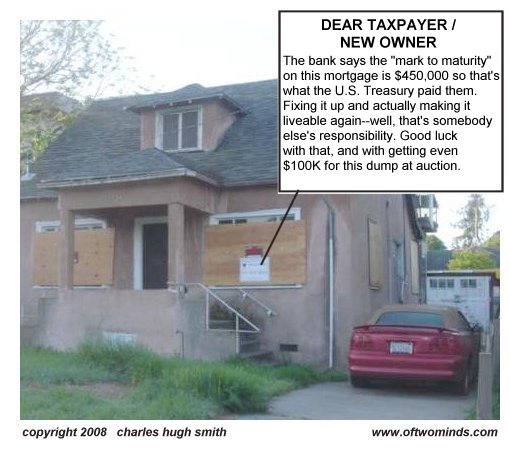 What is never mentioned in all this giddy talk of taxpayers "profiting" from buying the most distressed mortgages (and the MBS which bundled them) is that the future value of many of these properties is a negative number: that is, even if a buyer paid only $1, the house requires tens of thousands of dollars in repairs just to become habitable again. And an uninhabitable house has literally no value except scrap value for the materials.

In many cases, the scrap value will be less than the cost of the diesel fuel consumed by the bulldozer and truck taking the scrap to the dump.

It is difficult to find a reliable estimate of how many of the properties which underlie these "toxic" mortgages require massive inputs of cash to become habitable again, but a guess in the millions might well be low.

As I have covered here for years, abandoned houses which aren't stripped of copper wiring, plumbing fixtures, etc. still "go to seed" as demonstrated by the ruined pool above, and it costs tens of thousands of dollars just to fix the decay caused by abandonment.

Millions of abandoned/foreclosed homes in the U.S. are no longer worth fixing up. With qualified buyers scarce and the viability of collecting rent a huge question mark, potential investors would be taking huge risks even in acquiring properties like these for $1. Labor and materials are not cheap in the U.S.; even minimal rehab projects can cost over $50,000. And meanwhile, property taxes have kicked in on day one and are costing the new owner regardless of any other expenses.

While it may sound fun to Mr. Gross to spend 15 minutes calculating the "real value" of a mortgage-backed security, his analysis will be statistical and not at all based on any "on-the-ground" survey of reality.

Now Mr. Mauldin is clearly a very smart, experienced individual, but it does seem as if he too has been seduced into believing that mortgages and MBS are just paper assets and can be adequately analyzed as such. But even if you naively think mortgages are merely paper assets, a glance at this chart should give you pause. This is why nobody wants that wonderful bundle of Alt-A loans, Mr. Mauldin: the risk is visibly incalculable.

Other breathless accounts of vast profits just ahead for the "lucky taxpayers" footing the bill include heaping portions of gobblydegook about "senior tranches" and the like, all of which is purported to show how "the taxpayer really can't lose."

Question: if all these toxic (i.e. essentially worthless) mortgages are such a great deal, then why aren't Gross, Bush, Bernanke, and Paulson rushing out to snap them up themselves? Whys isn't Hank liquidating his $700 million portfolio and buying up all these wonderful deals?

In other words: if this debt was so risk-free and profitable, then private capital would already be snapping it up. These MBS are sitting unsold at 70 cents on the dollar and not even catching a bid at 55 cents on the dollar because private capital has made the intuitive assessment based on the following charts that there is a huge risk of losing most of your money trying to "catch the falling knife," i.e. buying residential real estate debt (mortgages) long before the bottom is finally hit. 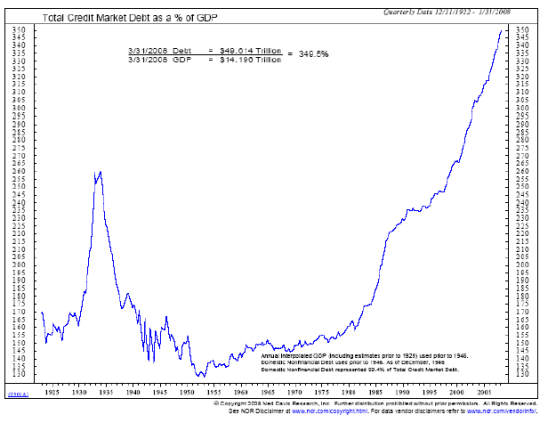 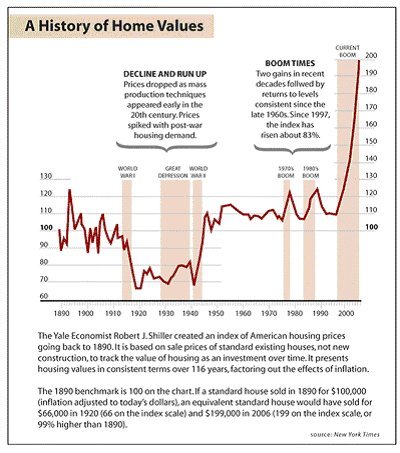 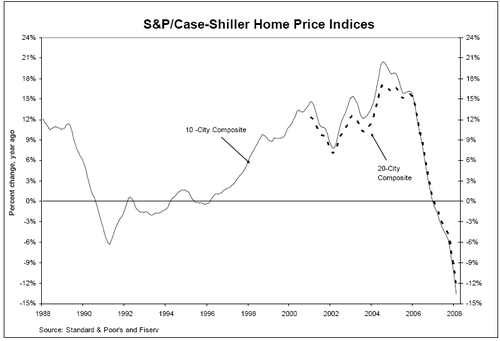 Furthermore, smart investors know that buying a bundle of hundreds or thousands of mortgages is simply bad money management; these are real houses and properties in actual towns and cities, and a savvy investor would want a report on each property, its neighborhood, local rental rates, estimates of repairs needed, and so on.

Inescapable conclusion: millions of these residential properties are a risk at even $1, much less Bernanke's absurd "mark to maturity" pricing. Abandoned properties aren't worth anything in many markets, and so as Paulson and Bernanke stand ready to buy a $200,000 mortage for "only" $150,000, based on the idea that splitting the difference between "mark to maturity" and a fictionally inflated "mark to market" is wise policy, please understand the taxpayers will not be making a profit--we will end up losing far more than any current estimate.

If it were that easy, then private capital would have long since snapped up the "bargains." If it were really as easy as buying up "cheap" mortgages, waiting a few years and then selling them for a big gain, private money would already be in the game.

Question 2: who is going to buy a trashed shell of a house in a few years, or pay good money to rent it? Answer: no one. Value of the property a few years hence: zero. The passage of a few years will add no value to abandoned houses. That fantasy is being sold as the fundamental reason why buying toxic mortgages will reap big profits for taxpayers.

If you don't buy "the passage of time will add substantial value to abandoned properties" argument, then you can't swallow the "taxpayers will profit" happy talk.

Thank you, Jim M. ($25), for your much-appreciated generous donation to this site. I am greatly honored by your ongoing support and readership.