The housing bottom many see in 2014 will not usher in a new boom; rather, it will merely mark the transition to a decade (or more) of stagnation.

Take a wild stab at when housing will bottom, and you can find an analyst's opinion to support your guess: one respected housing expert sees a bottom in six months, while equally experienced observers see a bottom in 2013, followed by a decade of slow improvement.

If history echoes, as it tends to do, then the last mini-bubble, bust and aftermath offers us an instructional model of how housing bubbles play out.

Why is this so? For two reasons: human psychology reliably swings between euphoria and caution in the marketplace, and the business cycle of rising debt and over-expansion followed by contraction of credit and retrenching is a feature of free markets.

Ned Davis Research and CNBC recently published a chart of this ratio, housing prices to median household income, which I have annotated in italics. 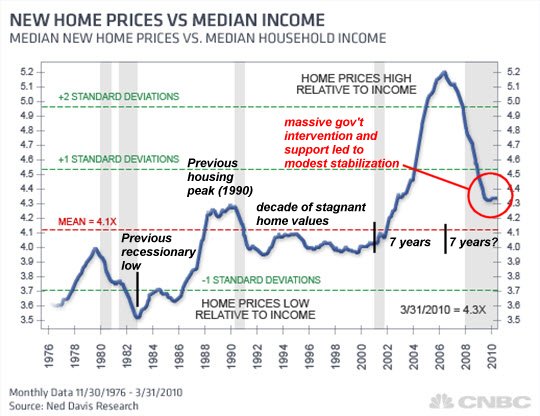 The ratio accurately reflects peaks and valleys in residential real estate: housing prices rose to a peak in the late 1970s, and then fell sharply in the deep 1981-83 recession. The resurgent economy boosted prices for seven years, leading to another peak in valuations in 1990.

For various macroeconomic reasons, housing then stagnated for about a decade, drifting below the historic mean of 4 times income. These factors included the relative balance of supply and demand between homebuyers and sellers, and the greater attractiveness of stocks and bonds to investors in the 1990s.

We all know the story of the Great Housing Bubble: low interest rates, disavowal of risk management, subprime loans to unqualified buyers and investor wariness after the dot-com stock market crash all led to a massive sustained surge in home buying.

In the early 1990s, home sales averaged about 4 million a year. By the mid-2000s, that number had nearly doubled to 7 million sales a year.

This imbalance between supply (limited) and demand (rising due to the influx of marginally qualified buyers and investors) and ubiquitous mortgage-lender/investment bank fraud led to seven years of skyrocketing valuations.

Once the Federal Reserve and Federal government finally acknowledged that housing prices were in a recessionary free-fall, the Fed stepped in to maintain super-low mortgage rates by purchasing $1 trillion in mortgages, and government agencies offered a slew of programs aimed at stabilizing the housing market and home prices.

As the chart reveals, these unprecedented efforts have provided a modest stabilization in valuations. But the limits of government intervention are painfully clear: according to the Treasury Department, bout half of the modifications done in 2009 were behind in payments by the first quarter of 2010.

The fundamental headwinds to any sustained rise in home values are substantial. Foreclosures have risen for the 9th month in a row, even as housing inventory continues to rise.

I first reported on the bulging foreclosure pipeline back in August of 2009.

More recently, I reported on the staggering numbers of underwater homeowners.

Other commentators have also noted the fundamental drag presented by the excess supply of existing housing units and the huge number of homeowners with negative equity (i.e. the mortgage exceeds the market value of the house).

Indeed, many analysts see a second leg down in housing prices as inevitable. There's nothing fancy or complicated about the reason: when supply exceeds demand, prices fall until there is a new equilibrium.

At this point, the guessing game moves from "when will housing bottom?" to "how much further will housing decline?" Some analysts are staking out future drops in the neighborhood of 5 to 8 percent, but bubbles tend to fully retrace to their starting point, and then dip another 10% just for good measure. "This time it's different"--yes, we heard that in 2000 as well, and the dot-com NASDAQ not only retraced all of its gains but then some. Why would housing perform any differently?

The answer is that yes, this time it is different: it's worse, because the Baby Boomers will be selling relentlessly for the next two decades. Demographics are against another housing mania as Boomers will be selling their real estate holdings to fund their hip replacements, retirement living, etc. Buyers from the smaller follow-on generations will simply not be numerous enough or wealthy enough to buy these millions of homes and vacation properties at anything close to today's prices.

There are three interesting features in the chart which suggest targets for both the housing bottom and the eventual bottom in valuations. Bubbles tend to rise and fall in symmetry, meaning that a bubble which took seven years to reach its apex typically takes about the same period to time to retrace to its starting point.

By that reckoning, the housing bubble which took off in 2001 and ended in 2007 will need about seven years to complete the retracement to historical valuations. That would put the bottom in the 2014 timeframe.

As for valuations, market watchers have long noted that "it's different this time" is a remarkably inaccurate basis for valuing anything. Thus we can look to the last deep recession in 1981-83 for some clues about where housing valuations may be heading: to about 3.5 times median household income.

This ratio of income to home prices is useful because it follows regional variations: higher income areas will have higher home prices, but the ratio will likely be about the same across the nation.

The last interesting feature is the decade of stagnation which followed the bust.

Bubbles do not arise again in the same asset class; they tend to bubble up elsewhere. Thus we can look for mania-led bubblicious valuations not in real estate but in some other asset class: silver, gold, the dollar (gasp! Sacrilege!), iridium, water, dirt, bat quano, the new gold-backed currency, the quatloo, etc.

"It's different this time" has a close and equally inaccurate cousin: "it can't happen here." Those counting on a timely resurgence in home valuations ignore the fundamentals of supply and demand at their own peril.


I am slowly catching up on correspondence after several weeks away from my desk --your patience is appreciated.