Resentment, frustration and anger are now ubiquitous features of U.S. culture. This is the consequence of several factors, none of them positive.

"Horn broken, watch for finger." This bumper sticker perfectly captures the zeitgeist of the nation: the horn is broken, and everyone is giving everyone else the finger.

Why are simmering resentment, frustration and anger now ubiquitous features of U.S. culture? I would posit the following factors:

1. A culture of entitlement: the U.S. is now a culture of takers obsessed with getting their "fair share" of the swag/borrowed money. "We were promised!" (public employees); "I earned it!" (Social Security recipient, though only the first 3-4 years of benefits are drawn from his/her contributions, and everything after that is welfare drawn from the hides of current workers); "healthcare/income security/housing is a right!" (everybody's got rights, but nobody seems to have any duties or obligations); "it's for the children/elderly!" (that is, my expense account, million-dollar pension, etc. are nominally protected by the banner of "education" and/or "healthcare"), and so on.

Those with access to "private welfare" such as CEOs are a privileged class; most of us have to elbow our way to the crowded public trough. The truly select feed at the Wall Street trough, which combines private welfare skimmed from shareholders and investors, and Central State welfare issued in unlimited billions via bailouts, Fed purchases of toxic debt, backstops, loan guarantees, etc.

But like the story about the attractive young lady who blushingly agrees to share her favors for $10,000, but balks when the suitor downgrades his offer to a paltry $100 (with the punchline being, "We've already established what you're willing to sell, now we're just haggling over the price"), the recipient has sacrificed autonomy in accepting the entitlement, regardless of the source or size. This is how complicity to a host of embezzlements, corruptions and exploitations is purchased.

2. A culture of victimhood: Victimhood is rewarded, shouldering ones' own load and thrift are punished. Like rats in a maze, Americans respond to incentives and disincentives: as a result, everyone is shouting out their claim to victimhood. The cacaphony is reminiscent of a classroom of spoiled children all claiming excuses for their odious behavior and poor performance.

3. Unrealistic expectations: nobody wants to do demanding physical labor, so skilled-craft jobs go begging and companies have to train workers. Favored careers include sports heroes, Web entrepreneurs (as long as the work isn't too arduous and the cashout comes quickly), entertainers, film makers, etc.--all highly desirable and all scarce in the real world.

Offers which don't meet Americans' lofty expectations of their market value are rejected with a sniff (and good old American optimism: "something better will come along soon").

Numerous financial websites offer up fare such as "how many millions do you need to retire comfortably," as if saving hundreds of thousands of dollars is even an option for the vast majority of wage-earners.

4. Hype, hypocrisy and propaganda dominate the nation's politics and mainstream media: soaring rhetoric about growth, recovery, the American can-do spirit, the benefits of bailing out the Financial Power Elite, etc. have raised expectations that have repeatedly been dashed by reality.

All these relentlessly glad tidings and admonishments flow from the rentier-cartel Power Elites of the State/Plutocracy partnership, which owns the MSM (mainstream media) and most of the nation's productive wealth.

Thus we get billionaire Charlie Munger (one of a pair of outstanding hypocrites at his firm) suggesting that "the little people" need to "suck it in and cope," leaving him and Warren to the task of reaping billions more from ongoing taxpayer bail-outs of firms they bought into with State collusion.

The announcement that the Great Recession is over is simply the latest in an unending line of increasingly meaningless pronouncements transparently designed to persuade the public that everything's really, really getting much, much better, and their sour mood in the face of this outpouring of "good news" is irrational and, well, downright annoying. Get with the program, people! Everything's going great! (at least for billionaires who were offered Goldman Sachs shares at the bottom.)

5. It's somebody else's fault: you can fill in the perps, but leave the American public/consumer/voter as hapless, helpless victims of nefarious forces.

6. The frustration of addicted debt-serfs: We hate the nation's political class and the "up yours" service provided by Corporate America, but we are seemingly powerless to rid ourselves of these Overlords and leeches. Voters rail against dysfunctional insiders, yet they re-elect the craven parasite in their own district. They complain about cable TV providers but don't cancel their service lest their addiction to the smack/coke cocktail of TV be curtailed.

7. The 30-year erosion of the middle class: this chart says it all:

The middle class filled the growing gap between stagnant earnings and steep increases in living costs, healthcare (a.k.a. sickcare), education, and housing with a second income (Mom, aunty, sister and Grandma all entered the workforce en masse) during the 1970s, and then they filled the still-widening gap in the 80s, 90s and 2000s with ever-expanding debt.

The dot-com bubble provided the illusion that permanently rising equities would painlessly fill the gap (pension plans were happy to join in the mass delusion). When that fantasy imploded, it was quickly replaced with the exact same fantasy, only this time based on housing.

Now that the "housing never goes down" fantasy has imploded, the dwindling remains of the once-great middle class are slouching dejectedly through the ruins of the political center (which cannot hold because there is no center, only a State/Plutocracy Elite and a rabble of State dependents defending their fiefdoms), filled with bitter resentments at this undeserved plight--for isn't this the Greatest Empire the World Has Ever Known?--beset by anxieties about the rough beasts (let us call them austerity, restraint, humility, responsibility, patience, sacrifice and thrift) whose hour has come round at last.

And just to end on a lighter note: 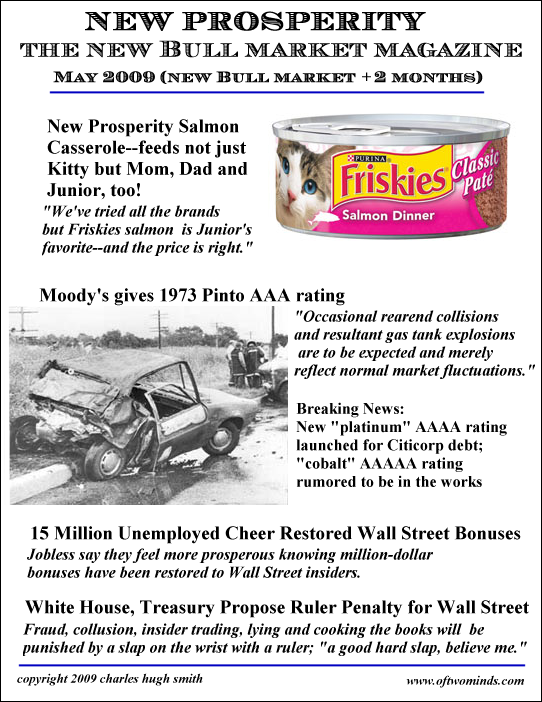 Special bonus quotes drawn from our extensive list at the bottom of the main blog page:

"But we are told that we need not fear; because those in power, being our representatives, will not abuse the powers we put in their hands. I am not well versed in history, but I will submit to your recollection, whether liberty has been destroyed most often by the licentiousness of the people, or by the tyranny of rulers.

I imagine, sir, you will find the balance on the side of tyranny. Happy will you be if you miss the fate of those nations, who, omitting to resist their oppressors, or negligently suffering their liberty to be wrested from them, have groaned under intolerable despotism!

Most of the human race are now in this deplorable condition; and those nations who have gone in search of grandeur, power, and splendor, have also fallen a sacrifice, and been the victims of their own folly. While they acquired those visionary blessings, they lost their freedom."

"We must believe in luck. For how else can we explain the success of those we don't like?" (Jean Cocteau)

"Do you know what amazes me more than anything else? The impotence of force to organize anything." (Napoleon Bonaparte)

"The man who has a garden and a library has everything." (Cicero, via Lee Bentley)


I am slowly catching up on correspondence after several weeks away from my desk --your patience is appreciated.


I will be tending to family matters during September and will be unable to read or respond to email--please accept my apologies in advance. Please post comments to the Daily Java forum.