The Big-Picture Economy, Part 5: The State, Taxes and the Shredding Social Contract   (September 27, 2013)


The social contract is fraying as those paying most of the income taxes are being squeezed from above and below.

The government--known as the state in political science circles--is fundamentally a social contract between the governed and the governing Elites. The governed agree to cede control and power to the state, and pay taxes for its maintenance and programs, in exchange for security and services that can best be rendered (or can only be rendered) by the state.

These traditionally include law enforcement, a judicial system, national defense, and since the early 20th century, education and social income-security programs.

I have long held that America is a The Three-and-a-Half Class Society (October 22, 2012): the "entrenched incumbents" on top (the "half class"), the high-earners who pay most of the taxes (the first class), the working poor who pay Social Security payroll taxes (the second class), and State dependents who pay no payroll or income taxes (the third class).

This class structure has political ramifications. In effect, those paying most of the tax are in a pressure cooker: the lid is sealed by the "entrenched incumbents" on top, and the fire beneath is the state's insatiable need for more tax revenues to support the entrenched incumbents and its growing army of dependents.

Let's start our analysis of the three-and-a-half-class society by noting that the top 25% pay most of the Federal income tax, and within that "middle class" the top 10% pay the lion's share of all taxes.

The second class is made up of the working poor: 38 Million Workers Made Less Than $10,000 in 2010-- Equal to California's Population (The Atlantic magazine)

After including earned-income tax credits, the bottom 60% of households paid less than 1% of all Federal income taxes, and the households between 60% and 80% paid 13%.

My conclusion: by heavily taxing earned income, the system extracts the highest taxes from the most productive citizens, leaving the less-productive with essentially no income taxes and the super-wealthy with the huge tax break offered to capital gains and other unearned income.

As I noted in Tyranny of the Majority, Corporate Welfare and Complicity (April 9, 2010):

In essence, this is a vote-buying scheme by the Status Quo: the top 1% control the policies of the State in alliance with the State's own Elites, and together they buy the complicity of the bottom 60% to passively accept their dominance.

In other words, the bottom 60% pay relatively modest taxes or are recipients of State transfer payments and the top 1% who own the political process limit their taxes by favoring unearned income (what they collect from sales of securities, stock options, rents, etc.) and various tax breaks purchased with political contributions.

It's a partnership of "Tyranny of the Majority" and "entrenched incumbent Elites." If the political Status Quo alienates the majority by making them pay more taxes, they risk losing power in the next election. If they alienate the top .5% who fund their multi-million-dollar campaigns, then they will also lose power. So they heap the tax burden on what remains of the middle class.

This creates an unstable economy, political order and social contract. Those paying most of the taxes understandably see their taxes supporting leeches above (the financier and political-apparatchik classes) and below (guys with wallets bulging with black-market cash using food stamps at Wal-Mart, the not-disabled gaming the system to extract lifetime disability payments, etc.)

The Trick to Suppressing Revolution: Keeping Debt/Tax Serfdom Bearable (May 16, 2013)

The Social Contract is broken not by wealth inequality per se but by the illegitimate process of wealth acquisition, i.e. the state has tipped the scales in favor of the few behind closed doors and routinely ignores or bypasses the intent of the law.

By this definition, the Social Contract in America has been completely shredded. One sector after another is dominated by cartel-state partnerships that are forged and enforced in obscure legislation written by lobbyists. Once the laws have been riddled with loopholes and the regulators have been corrupted, "no one is above the law" has lost all meaning.

Those who violate the intent of the law while managing to conjure an apparent compliance with the letter of the law are shysters, scammers and thieves who exploit the intricate loopholes of the system. In this way, the judicial system becomes part of the illegitimate process of wealth accumulation.

This is the norm in banana republics, whose ledgers are loaded with thousands of codes and regulations that are routinely ignored by those in power. In the Banana Republic of America, financial crimes go uninvestigated, unindicted and unpunished: banks and their management are essentially immune to prosecution because the crimes are complex (tsk, tsk, it's really too much trouble to investigate) and they're "too big to prosecute."

The rot has seeped from the financial-political Aristocracy to the lower reaches of the social order. The fury of those still working and paying substantial taxes is grounded in a simple, obvious truth: America is now dominated by scammers, cheaters, grifters and those gaming the system, large and small, to increase their share of the swag.

Formidable armies of scammers and their enablers (attorneys and doctors) are pillaging workers compensation and Social Security Disability (the lifetime kind, your claim and condition are never monitored after your claim is approved), not to mention Medicare fraud and those gaming the wide array of welfare programs.

The honest taxpayer is a chump, a mark who foolishly ponies up the swag that's looted by the smart operators. Everyone knows that the vast majority of wealth accumulation in America flows not from transparent effort on a level playing field, but from persuading the State (the Federal government and the Federal Reserve) to enforce cartels and grant monopolistic favors.

When scammers large and small live better than those creating value in the real economy, the Social Contract has frayed beyond repair. When the illegitimate process of wealth acquisition--a rigged playing field, a bought-off referee, and an Elite that's above the law by every practical measure--dominates the economy and the political structure, the Social Contract has been shredded, regardless of how much welfare largesse is distributed to buy the complicity of state dependents.

Once the chumps and marks realize there is no way they can ever escape their role of exploited tax donkeys and debt-serfs, the scammers, cheats and grifters large and small will be at risk of losing their perquisites. The fantasy in America is that legitimate wealth creation is still possible despite the visible dominance of a corrupt, self-serving, parasitic, predatory financial-political Aristocracy. Once that fantasy dies, so will the marks' support of the Aristocracy.

As Voltaire observed, "No snowflake in an avalanche ever feels responsible": every phony disability claim and every political favor purchased is "fair and legal," of course. This is precisely how social orders collapse: no one is responsible for anything but maximizing their personal share of the state swag.

For those who prefer charts, let's look at the state's rising share of the national income. Here is GDP: 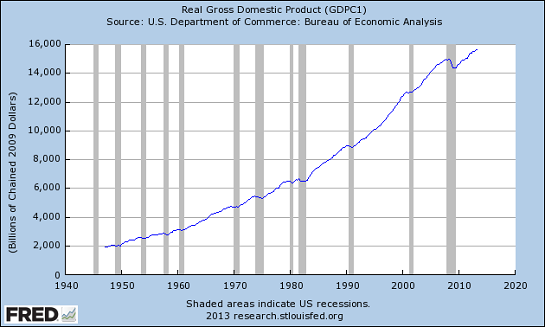 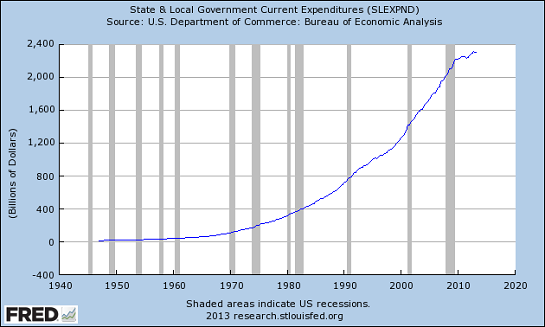 Add in Federal spending and you get about $6 trillion, or about 40% of GDP: 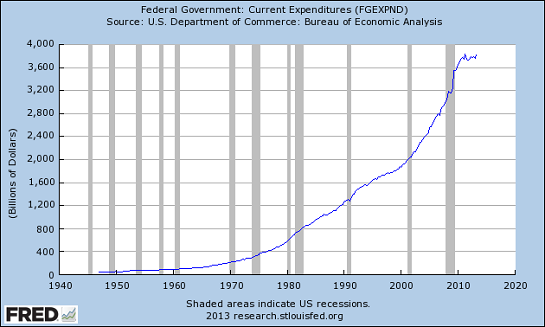 Here is Federal debt "owed to the public," i.e. external debt that accrues interest and must be rolled over in Treasury auctions: 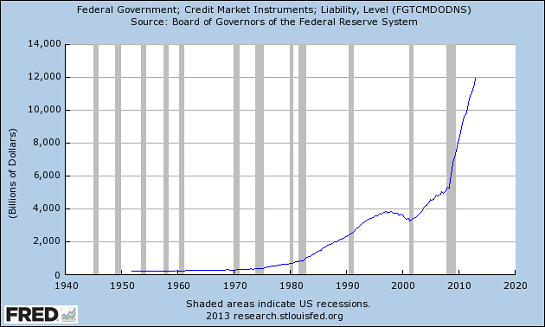 And last but not least, total credit market debt, public and private. This does not include an estimated $200 trillion in unfunded liabilities, i.e. future obligations that will have to be paid with either taxes or more borrowing. 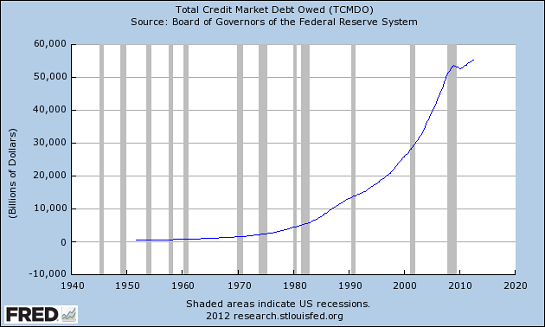 As the state borrows trillions of dollars to support its Aristocracy and dependents, its debt skyrockets. The political Aristocracy expects the tax donkeys will carry a heavier burden without revolting, and the 60% "tyranny of the majority" who pay little but collect enough to get by will be wary of risking their benefits by resisting the existing political-financial kleptocracy.

In terms of democracy, the tax donkeys are trapped; they can't match the tens of millions in political contributions of the top .5%, and the 60% below them will support the status quo out of fear that the alternative could be even worse.

Politically, the system is unbreakable. Financially, it is unsustainable.