A number of commentators are claiming China is poised to replace the U.S. at the top of the nation-state heap in terms of global influence. Perhaps the realities of adding/subtracting superpowers are not quite so superficial.

NOTE: "Big nose" is Chinese slang for a Caucasian.

Correspondent Cheryl A. recently sent in two articles on China's ascendency with stake out the extremes in the thesis. The first is The great shift in global power just hit high gear, sparked by a financial crash: As an emboldened China sees, the American dollar is gravely wounded. And the days of US political supremacy are numbered.

Author Martin Jacques (whose book, When China Rules the World: the Rise of the Middle Kingdom and the End of the Western World comes out in June) posits that the coming collapse in the dollar and its replacement with a new international currency hosted/supported by China augurs a global shift of superpower status from the U.S. to China.

Meanwhile, on the other end of the spectrum of opinion, geopolitical pundit George Friedman suggests that the idea China is poised to replace the U.S. is roughly equivalent to similar claims made in the late 1980s about Japan replacing the U.S. KGB INTERROGATION: George Friedman.

Interviewer Alan Kohler: George, the assumption is that were witnessing the transfer or the shift of geopolitical power from the US to China and that this has been sort of if anything accelerated by the global financial crisis, but youre predicting that China will fragment by 2020, in your book. Can you explain why you think that and why the global financial crisis will not prevent it?

George Friedman: Well, in the first place you have to remember that China is very much a Third World country. Of the 1.3 billion Chinese, well over 1.1 billion have a standard living on the order of Nigeria. If you go to Shanghai and drive to Pudong, you can get the illusion that this is a European or American country, but just walk blocks away from the centre and youll see a very different China.

Secondly, the Chinese economy is a hostage of the foreign international system, but primarily of the American economy. China is incapable of domestic consumption on the order of production. So, when the United States catches cold, China gets pneumonia and that really is an important thing to understand  that China does not have an economy as we understand it in the sense of substantial domestic consumption. The Chinese economy is overwhelmingly export-oriented and therefore China is a hostage to its consumers. 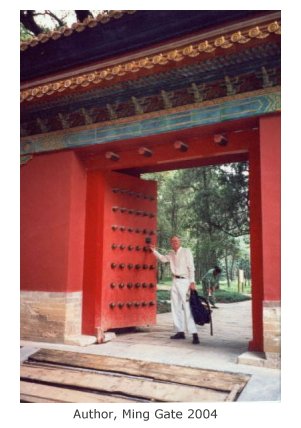 Some context for these two disparate stories can be found in my essay China: An Interim Report. While I wrote this back in 2005, the issues it addresses-- financial fraud/misrepresentation, corruption, pollution and a command economy--are all very much in play.

It may strike many as odd that the issue of China's ascendency can draw such irreconcilably opposite opinion. I believe the fundamental reason is that it is easy to draw superficial conclusions about China (and Asia in general) because much of what matters in Asian nations and cultures occurs below the surface and is not discussed in public.

The reason is "face": the sense of public shame which has no real analog in American or indeed Western culture. In Asian societies, one does not air private "dirty laundry" in public. This is true of embarrassing or potentially shameful issues of individuals, families, companies, and the nation as a whole.

Anyone who thinks that a Big Nose can waltz into Shanghai, Beijing, Tokyo, Seoul or Bangkok and get a straight answer about less-than-glowing situations is misguided. Officials will happily show Big Nose know-nothings a glitzy superficial surface while carefully skirting any embarrassing flies in the ointment. In other words, Big Nose bigshots will be shown Pudong and fancy hotels in Shanghai but will never get access to dirt-poor villages filled with restive, combustible peasantry.

A supposedly "open" society can close off with remarkable speed, and the chatty guide can turn stone-faced and unfriendly in very short order.

Though Asians typically are highly attuned to the need of others to "save face," the opportunity to put a better face on complete catastrophy will always be taken. Thus special rice fields were grown on either side of a specific road just so Chairman Mao could be driven into the countryside to see the bountiful rice crop being grown, even as millions of his countrymen and women died horrible deaths from a mass starvation brought about by the policies of Mao's government and the CCP (Communist Party of China).

Thus, while China's leadership expounds publicly on China's great prosperity, they're secretly buying houses for cash in Vancouver B.C. and Los Angeles, CA as retreats for their own families should things head down in China. Hmm, why would they do this if they really believed in China's ascendency?

Ignorant Big Noses often respond to face-saving measures with disbelief and anger. Why did they lie to me? Ah, but it wasn't a lie; it was simply the public expression of saving face. To expect the embarrassing truth to be stated publicly is to expect the impossible.

The Big Nose will be enticed to build the pharmaceutical plant but not shown the perfect copies of his products which contain no medication that are sold as "the real thing" at enormous profit to the counterfeiters and enormous harm to consumers seeking remedies.

The Chinese media reports a manufacturer who was making exact copies of Japanese motorcycles has been shut down, but does not report the shop opened up in a nearby city a week later. And so on.

The Chinese have learned the value of bogus statistics from the masters of deception in the U.S. government, which routinely misprepresents inflation, unemployment and other key statistics as a matter of policy, lest the "bad news" spark some demands for change in the status quo. As a consequence, we should view all "official" statistics issued by China with the same skepticism that we view bogus U.S. government statistics.

But unlike the U.S. government, China's central government directly controls all the important levers of economic and financial activity. Copper being stockpiled? Only the government knows. Interest rates mandated lower? The government ordered the banks to do so, end of story. 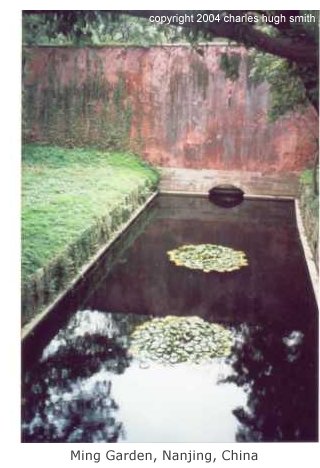 All of which is to say that only those with access to the highest levels of local government can say what's actually happening in China. "Growth" numbers can be juiced, but electrical consumption is harder to flim-flam, and so on--but even electricity stats can be massaged. I say "local government" because I suspect not even the Central Government really knows what's going on at the local level, because reporting bad news would not only result in a loss of face but quite possibily a loss of position and prestige.

For better or worse, the U.S. decline and the consequences of our profligacy, addiction to debt, corrupt and venal banking sector and all the rest are aired 24/7 globally. Want to puncture Yankee hypocrisy about slavery in the pre-1860 Northeast? No problem, the data is on the Web.

Nothing delights a skeptical, suspicious-of-authority American as much as the exposing of official chicanery and the confirmation of our deepest suspicions about corporate skulduggery and government lies/manipulation. But in Asia, such revelations are a national embarrassment to be swept under the rug at the earliest possible convenience. "Self-criticism" is an exercise in stating the unavoidable and then using that confession as an opening to revel in the weaknesses of others.

As for the dollar's demise leading to China's rise: it isn't that simple. I would rephrase As an emboldened China sees, the American dollar is gravely wounded. And the days of US political supremacy are numbered to:

An increasingly desperate China sees the dollar as doomed and seeks an alternative as an act of self-preservation. That all fiat currencies are doomed is easily anticipated; but the process of their mutual decline is far messier than such superficially breezy pronouncements make out.

As opined here before: the question is not which fiat currency loses value against gold, but which one loses value faster. A replacement currency may not take shape as expected; there may be various alternatives such as a private gold-backed "quatloo" for global business transactions or a regional currency backed by a basket of commodities which includes petroleum and other tangible commodities in high demand.

Perhaps a private grain-backed currency will draw upon the grain exports of North America as the only "real wealth" of nations. Would you buy a wheat-backed "quatloo"? I personally would be interested in trading paper for wheat, gold, oil or anything more valuable than paper. 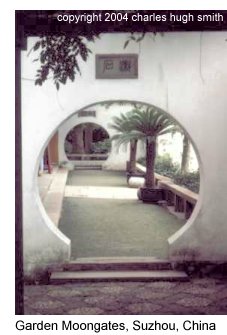 In other words, another fiat currency will not replace the dollar because it offers little to no advantage. We already have more than enough paper money, and a yuan will devalue just as rapidly as a regional currency backed by nothing more than promises of paper value.

And if there are any last words on "superpowers" and "global supremacy," I would look not to currencies alone but to the health of a nation's citizenry. At this point, it's a race to the bottom: which nation kills off its citizenry first: the U.S., with its illness-producing glorification of a fat and sugar-loaded diet which has sparked an obesity epidemic, or China, whose poor air quality is shortening the lives and productivity of hundreds of millions of its citizenry.

Maybe it won't be one superpower or two superpowers, but no superpowers: just a collection of nation-states of various sizes, all of which face a long list of structural problems.


Looking for something new to read? Scan our current "recommended" list: (Many recommended by other readers)

When Giants Fall: An Economic Roadmap for the End of the American Era

The Underground History of American Education: A School Teacher's Intimate Investigation Into the Problem of Modern Schooling

Learning All The Time

The Road to Serfdom

First In: An Insider's Account of How the CIA Spearheaded the War on Terror in Afghanistan

Propaganda: The Formation of Men's Attitudes

Age of Propaganda: The Everyday Use and Abuse of Persuasion

Hanging On, Or, How to Get Through a Depression and Enjoy Life

The Richest Man in Babylon

Only Yesterday: An Informal History of the 1920's

Maxed Out: Hard Times, Easy Credit and the Era of Predatory Lenders

The yankee and cowboy war: Conspiracies from Dallas to Watergate

A History of Money and Banking in the United States: The Colonial Era to World War II

The Mirror Effect: How Celebrity Narcissism Is Seducing America

Thank you, Michael B. ($50), for your outrageously generous contribution to this site. I am greatly honored by your support and readership.