Despite the year-long equities rally and the euphoric mood of speculators and government officials, maybe the best trade of the next 5 years will be short-term U.S. Treasuries.

Stocks provide the highest returns over the long run--blah blah blah--except when they don't--such as during periods of rising interest rates.

As always, I remind you that this site is not investment advice--it is merely the freely-offered ramblings of an amateur observer. Please read the HUGE GIANT BIG FAT DISCLAIMER below for more.

Governments everywhere are borrowing trillions of dollars every year to backfill their plunging private demand and borrowing. Governments that can print their own currency with one hand and buy their debt offered by the other hand (i.e. the U.S.) have managed to keep rates down by this slight-of-hand, and the U.S. has benefited from "flight to relative safety" and the need of our trading partners to park their excess dollars in a liquid market such as U.S. Treasuries.

All this pushed yields on the 10-year Treasury bond to historic lows in December 2008; since then, the TNX (CBOE 10-year Yield Index) has almost doubled from about $20 to around $40.

Let's look at some charts for context. Here is an oldie but a goodie which shows the massive Chinese purchases which helped keep yields low in the 2003-2007 era:

Here is another chart of the 1958-2007 period, overlaid with the Dow Jones Industrial Average (DJIA). The global financial crisis is not shown (2007-2009) but this chart reveals the basic correlation of rising bond yields and flat-to-falling stock valuations.

Note how the DJIA took off in earnest once bond yields reversed and started falling in 1983. In case you have any doubts about how stocks fared in the 1969-1981 era of rising bond yields, take a look: 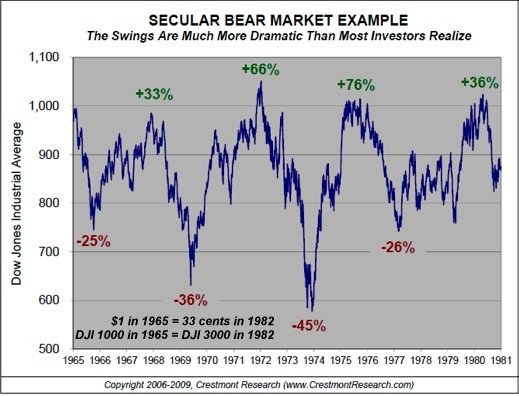 Buy and hold was a catastrophe for 16 long years. OK, that was an inflationary era; what if this is a deflationary Bear era? Then we can look to the 1929-1946 period for guidance; the DJIA was still about half of its 1929 peak 17 years later in 1946. Stocks didn't do that well in a deflationary era, either.

One way to contextualize any market is to ask: if I was managing (say) $600 million for a family that simply wanted to retain the purchasing power of their holdings, what would I do?

One clue is to look at what insiders are doing in the stock market rally: they are selling massively: Insider Selling Hits New 2010 High.

How about long-term Treasury bonds? It's not much of a secret that the 29-year bond market rally has ended: In Case You Missed It: Charts Show Bond Rally Is Over.

"There have been only three reversals into rising rate cycles in the last 200 years; we are in the fourth," said Louise Yamada, the former chief technical analyst at Citigroup Inc. who now runs Louise Yamada Technical Research Advisors LLC in New York. Yamada, who started as a technical analyst at Smith Barney in 1980 and was top ranked in Institutional Investor magazine's annual survey from 2001 through 2004, says that while previous bull markets in U.S. bonds ranged from 26 to 37 years, the most recent one was the biggest.

Investors who bought Treasuries in 1981 reaped almost twice the returns as those who bet on the Standard & Poor's 500 Index.

Non-wealthy folks are always seeking to increase their wealth via speculations, while the super-wealthy are mostly seeking to preserve the stupendous purchasing power and wealth they already have. And since as I have noted here many times recently, 43% of the financial wealth of the nation is held by the top 1% and 72% by the top 5% (The Contrarian Trade of the Decade: the U.S. Dollar March 22, 2010) then we can safely predict that what the super-wealthy decide to do will move the markets.

We should be mindful of this difference in perspective between the average financial pundit, small-time money manager, newsletter writer, financial blogger and MSM financial commentator and those who own the nation's financial wealth.

To summarize: in inflationary eras, stocks lose 2/3 of their value. Yes, yes, if you're fleet of foot and nimble and a brilliant trader, then you might be able to overcome this gargantuan wealth destruction by going long and short and leveraging your bets at just the right moments. But if you control $600 million, the problem is much simpler--just keep whatever purchasing power you already own.

Yes, gold is one potential avenue, but liquidity and other basic money-management issues such as diversification suggest that some of the super-wealthy funds would be happy to just earn a modest inflation-adjusted return.

Put together a generational trend of rising rates, demographic insolvency, population/resource imbalances, costly oil/energy and what do you get if you're trying to protect $600 millon? Short-term Treasuries. Yes, sovereign default of the U.S. is possible, but as Keynesians are ever-delighted to note, the U.S. can print its own currency. If that eventually results in inflation (something I don't consider likely due to the sheer size of assets losses-- Deleveraging and the Futility of "Printing Money" April 2, 2010)--then the short-term T-bills will have to offer some real return lest they attract no buyers.

So the "smart money" will exit risk-laden, low-return equities and long-term bonds entirely for the safety of the short-term Treasury market. If we are in a deflationary era, then short-term T-bills will still offer wealth preservation, as prices will fall, driving the real (purchasing power) yield higher than the nominal yield.

If this is so, then we can expect the stock market to slowly drop to a mere shadow of its current euphoric self and the long bond to be destroyed as rates rise. By the time the financial punditry has caught on, the smart money will have already exited equities and long bonds. It's called distribution, and it's what we're seeing now in the stock market.

I am indebted to frequent contributors B.C. (Imperial Economics) and Harun I. for their insights into these matters.