Disconnect Between the Real Economy and Stocks May Widen   (August 2, 2010)


The insane disconnect between the rising stock market and the tanking real economy may widen further as stocks rise.

The U.S. economy appears to be suffering from near-schizophrenia: the stock market marches ever higher even as the real economy is imploding. Corporate profits are the proximate reason--and who says you need a vibrant economy to rake in stupendous profits? Just slash and burn expenses, fiddle with pro forma numbers and voila, earnings keep rising, especially compared to the sinkhole earnings posted in 2009.

Thus I was not surprised when the market rose to 1,120 on the S&P 500 and 10,600 on the Dow. The market then took a breather last week, and those anticipating a much-deserved crash based on fundamentals became hopeful once again.

Technically, a strong case can be made that the past week was just a typical retrace in a Bullish uptrend. In other words, despite the widening gap between stocks and reality, the charts suggest the market is set to waft higher.

As always, please read the HUGE GIANT BIG FAT DISCLAIMER below to fully grasp that these are the freely offered meanderings of an amateur observer, and are not investment advice. (This is free, and you get what you pay for.)

I know this chart may look cluttered to the inexperienced eye, but let's take each bit of technical evidence one at a time. This is a daily chart of the DJIA. 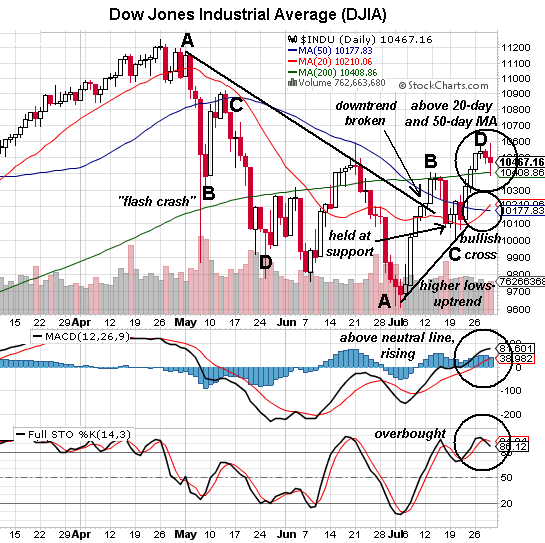 - The MACD (moving average convergence-divergence) is rising, and has climbed above the neutral line. This is unabashedly bullish.

- The stochastic is overbought, and currently declining, but an overbought market suggests continued strength in buying.

- From the early July lows, the market has entered a strong uptrend, carving out higher lows and higher highs.

- The downtrend from May 1 has been decisively broken by this new uptrend.

- The 20-day moving average (MA) has crossed bullishly up through the 50-day MA, providing strong evidence that the uptrend is not a flash-in-the-pan.

- The sharp July16 downdraft held at the key support level of the 20-day moving average.

- The market broke decisively above the 50-day moving average which had offered strong resistance in May and June.

- The market has risen above the key technical level of the 200-day moving average. Despite several attempts to break down below this key support, the market has rallied every time to close above it. That suggests significant buying is still taking place.

- A bullish A-B-C-D pattern is being traced.

If the trend up is strong, then we can expect another A-B-C-D pattern to develop. From this point of view, these four or five days of weakness are a weak countermove or retrace against the primary uptrend, and are to be expected.

To confirm whether the trend is actually long-term or not, let's turn to the weekly chart of the Dow Jones Industrials. 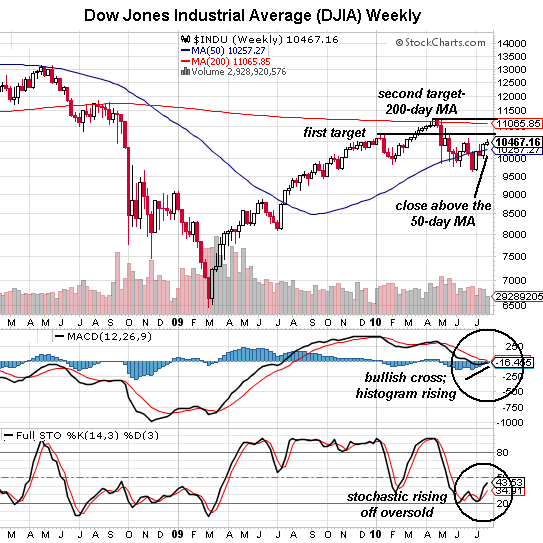 Here we see that the DJIA has regained the key 50-day moving average, a level of support which it penetrated in the May-June weakness. That the Dow has closed decisively above the 10,257 50-day MA is bullish.

The MACD appears to be about to make a bullish cross, and the histogram has been rising for several weeks, adding to the bullish case. The stochastic has been rising strongly off deeply oversold levels.

As I suggested back on June 28, this would set up a double top--the classic signal of a major top in the market.

The jobs report scheduled for release this Friday, August 6, may be the make-or-break moment. If jobs were added--and what's a phantom slew of "birth-death model" jobs for if you can't use them to juice the report when you need a positive print?--then the market may well run wild with euphoria that there is now "strong evidence that the recession is over."

If massive tinkering fails to create a positive number (some current estimates are for a loss of 60,000 jobs), then the wheels may well fall off the market rally.

Can the disconnect between reality and stocks widen? History suggests it is a distinct possibility--especially when so many power players are dependent on a rally for their political and financial survival.

Disclosure: I am long the market via DIA, DIA calls and BAC calls. 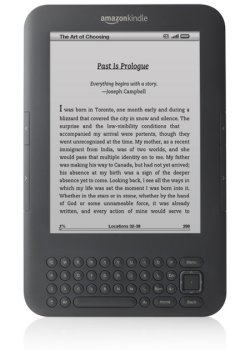 "What the heck, it's only the cost of a latte" $2.99 Kindle book sale: Here are quick descriptions of each novel's plot, genre and theme.

If you're going to buy the new $139 Kindle Reader (6" Display, U.S. Wireless, shipping August 27), please do so through my site as I earn a modest commission which costs you nothing.