China and the U.S. share two central traits: a financial-command-economy and an addiction to cheap, easy money to prop up bubbles that serve the status quo.

Despite the many obvious differences between the Chinese and American systems of governance and "capitalism," there are two key similarities. We might phrase this thusly: China's leadership has empowered specific strains of capitalism to serve the party's socialist goals, while the American leadership has socialized the mortgage/housing/banking sectors to serve its predatory-capitalist Masters (the financial-rentier Power Elite).

Conversely, when income inequality between the financial Elites and the public rises, as it has in the U.S. since 1973, then prosperity becomes concentrated in the top layer of the society to the detriment of the lower 95%.

This inequality inevitably breeds social disorder, and thus the Power Elite is driven to mask the rising inequality with various simulacra of prosperity (asset bubbles, etc.).

Another trait China and the U.S. share is rising income/asset inequality. A small Elite class of each nation's citizenry has reaped the majority of the last 30 years' financial rewards; recall that some 2/3 of the productive assets of the U.S. are owned by the top 1% of the citizenry. While I haven't been able to find the statistics for China, I am confident that 2/3 of China's newfound private wealth remains in relatively few hands--undoubtedly many of Hong Kong or Taiwanese origin.

One of the key mechanisms financial Elites use to create a simulacrum of widespread prosperity is a real estate bubble. Homeownership in the U.S. is now around 67% of the households, though it is probably heading down to around 60-62% as foreclosures continue climbing.

The homeownership rate in China is much higher--around 85%, for the reason explained here before: citizens were deeded their homes for very modest sums in the early 1980s. (All land is owned by the government; it is only leased to private owners.)

With real estate so widely dispersed among the populace, then any rise in real estate prices boosts assets and lends an air of prosperity to most of the public. This bubble triggers "the wealth effect," causing people to feel wealthier even when they haven't sold their homes and taken an actual profit. This encourages spending and borrowing, propping up the status quo without actually redistributing income, lowering taxes or effecting any actual change in the imbalance of power/wealth between the Elites and the public.

If real estate is leaping by 30% a year, and savings accounts draw 3% or less, then where are you going to put your cash? Low rates and easy money mean that cash can be leveraged via a mortgage.

But unfortunately for both the financial Elites and the public, all bubbles eventually pop--and the longer they are inflated, the bigger the implosion. This too is intrinsic to the Survival+ critique.

To provide some basic context on China, I wrote this essay back in 2005 (updated 2006): China: An Interim Report: Its Economy, Ecology and Future. It remains a decent overview of various financial, ecological and cultural issues.

As for China's resurgent property bubble, here are some sources:

Mania on the Mainland Think the U.S. real estate bubble was bad? China's could be worse (BusinessWeek)

The U.S. political and financial leadership is desperately attempting to reinflate the U.S. housing bubble--and succeeding in a weak fashion at the cost of trillions of dollars. I have already addressed the mechanisms here many times: the Fed buying $1.2 trillion in toxic-dump mortgages to keep the mortgage securitization market artificially alive; the $8,000 giveaway "credit" to new home buyers--a giveaway widely abused by scammers; pumping up FHA so half the mortgages in the country are government-backed, and the super-low interest rates engineered by the command-economy-socialist project known as the Federal Reserve.

By dumping even larger sums (when measured as a percentage of GDP) than the U.S., China has successfully reinflated its real estate bubble. But neither of these quasi-capitalist, quasi-socialist "solutions" has actually reinvigorated the home economies; all that has been accomplished is the financial Elites in each nation were saved and let loose to pillage the populace one more time, while the general homeowning public is being set up yet again for a catastrophic decline in their assets and a shattering loss of equity and solvency.

The game seems to be losing steam, at least if we judge the FXI China stock market index as a rough proxy for the speculative easy-money, low-interest-rate frenzy: 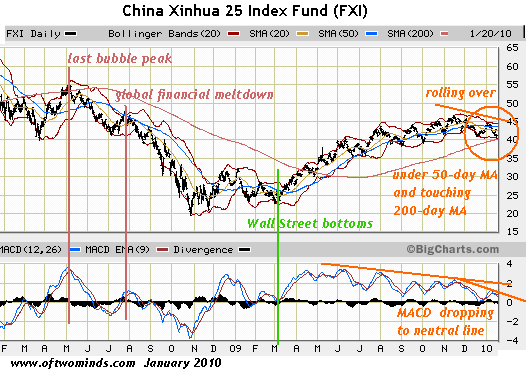 The irony is that using socialist-financial-command-systems (China's central bank and the Federal Reserve/Treasury State organs) to arouse and then deflate capitalist "animal spirits" speculative manias is inherently doomed to failure. The FXI index suggests the Elites are exiting/distributing, leaving the bagholders as the last believers that there can be no bubbles in China.

As China leads, so the U.S. will follow. The U.S. stock market's bagholders are the last beleivers that an economy shedding jobs and losing tax revenues is "growing robustly." Heh. Look out below.