Oil and agriculture have a peculiar correlation: all large-scale agriculture is dependent on oil even as the oil exporters depend on oil revenues to feed their populations.

Longtime correspondent Albert T. has often drawn my attention to the grain markets; he recently connected the drop in revenues of oil exporters to their growing demand for grain:

Yemen calls for aid to fend off famine:

Take $365 million, now take their food imports below at 2.5 million times, lets say $266 a ton taken from the FAO link, will equal $665 million. The increased oil consumption by the gulf states and their own populations goes out the window since now they have to sell every drop of oil at any price to feed themselves... Even if the price for wheat is significantly less, ergo grain from Ukraine or Russia which is generally a little cheaper than U.S., it does not fix their problem.

"Abdul Hamid Al Soofi, assistant general manager of the state Yemen Economic Corporation, last month predicted the wheat crop would rise to 900,000 tonnes this year from 600,000 in 2008 and wheat imports would hold steady at 2.5 million tonnes in 2009."

"Of course we are buying wheat on the open market, but with the oil price dropping, the question at the end of the year is how much foreign exchange Yemen will have," Al Iryani said.

This article shows an example of what I think will happen globally in a year or two: oil prices collapse to very low levels while food goes higher. (emphasis added, CHS) Replicate the above process with countries from Iran to Nigeria to Saudi Arabia etc.

If grain goes to $400 or $500 a ton even large oil producers like the Saudis or Iran will have a very very painful reality. Basically I assume two things:

one, if someone buys wheat for $400 a ton and then turns it into flour they have to charge $800 to be viable furthermore after that once the baker gets it and makes bread or some other thing they have to charge $1600 for that end product. Ergo a quintupling effect through the supply chain.

The second assumption is that once large imports of grain occur due to supply/demand impacts they continue for a while. A drought does not end in one season and soil does not recover instantly once it does end.

Now lets for the sake of argument assume Iran makes $10 billion in profit off of its oil. It would need to provide end users with $9.6 billion in subsidy so that they wouldn't be "unhappy". Keeping people fed would take priority over subsidizing gasoline usage and other wonderful things like the nuclear weapons program, etc. If people are upset this much by an election over which figurehead leads them into the future, who knows, maybe they will be more angry over not having bread.

Another absolute idiocy I see is the focus on prices by nonprofits so that they could give grain for free to the poor nations. During good times it created a dis-incentive for farmers globally to plant grain because non-subsidized prices were low. So volumes kept falling and acreage went to other crops; if prices are successfully suppressed, volumes will continue to decline. This focus on the symptom, ergo prices (due to shortages and not disease) is astounding.

Thank you, Albert, for a fascinating look at food and oil. If grain was not affected by anything but the price of oil, than as oil dropped in price then eventually so too would the price of grain, and the oil exporters would be able to buy grain for lower prices even as their oil revenues dropped.

But a funny thing happened on the way to lower oil prices leading to lower grain prices: drought and other supply forces. Food production is dependent not just on oil but on water, and as correspondent Bart D. reports, Australia's farmers and grain production is suffering from a historic drought of epic proportions. That matters globally because Australia is a karge grain exporter.

On top of everything else we have our historic drought. This river system, which is rapidly closing down, is the principle water source for about 1 million people in the State of South Australia. I live 700km away from it and even we use its water. Our own ground water supply is critically depleted across the region and water restrictions have just been intensified. There is talk of blocking all new development in our region until water security is achieved.

Reality (here in australia at least) says thing are getting tight and there won't be much cheap surplus grain to be had for third world famine relief. I feel that the price signal the market is now giving out could be dangerously wrong. Not unlike the price signal for oil/gas.

Starvation because of cheap grain would be ironic.

If I was a farmer here, I'd avoid selling forward and wait for the price to rise later in the year or early next year. Trouble is the banks are demanding forward contracts as part of financing arrangements for putting in this years crops.

Our government here in Australia is making some solid efforts at helping farmers find the best ways of moving forward through change and uncertainty - both climatic and economic.

My primary concern is that the capital that farmers have left to deploy into 'change' is rapidly dwindling. Particularly in areas hardest hit by our current drought cycle.

Thank you, Bart, for this troubling report. We should also note that the demographic trends in most oil exporting nations are dramatic: their populations are exploding as birth rates are high and healthcare improves.

A year ago when oil was nearing $150 a barrel, the idea that the cost of feeding their populaces could exceed their oil revenues was unthinkable. But if one of the few major grain exporting regions (Ukraine, Canada, France, Argentina and the U.S.) suffered a decline in production due to drought, severe weather or rampant disease, then grain could easily double in price even as oil revenues fell in half due to the global depression lowering demand. (This is the "oil head-fake" I predicted quite some time ago: Oil: One Last Head-Fake? (May 9, 2008)

As Albert noted, such an imbalance would force many oil exporting nations to make exceedingly unpopular /difficult choices; as the Bob Marley song had it, "A hungry mob is an angry mob," and the glory of owning nuclear weapons might pale when one's children are hungry and the government till and granaries are empty.

As this somewhat dated chart reveals, it's not just oil-exporting nations who are importing huge quantities of grain to feed their rising populations and/or rising demand for meat raised on imported grains.

Maybe grain will be the "new oil"--you need it, we have it, now ask us want we want for it. How about some nice cheap oil, or "cooperation" in things which matter to us?

I've explored this idea in the past: Is There an Organization of Grain-Exporting Countries (OGEC) in Our Future? (May 26, 2008)

Lagniappe chart: Since we discussed the Dow Jones Industrial Average yesterday, here is a chart from 2007 at the market peak which displays key fibonacci projections. Interestingly, key levels around 8,800 and 7,200 have been key points of resistance and support on the way down to the bottom in March 2009 and the move up since then. 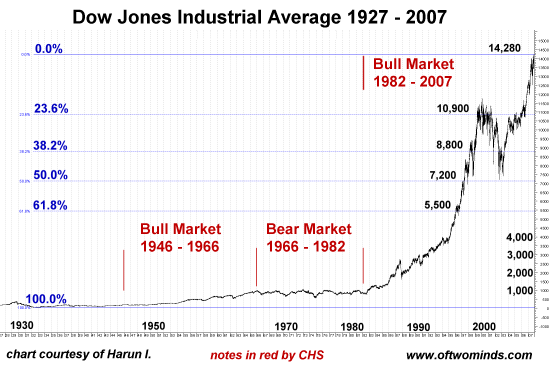