Advocates of a smooth transition away from petroleum may be surprised by the consequences of huge swings in the cost of oil.

I first proposed a "head-fake" in the price of oil in 2008. My thesis was that the oil exporting nations had become so dependent on revenues from oil that even as prices plummeted in global recession, they would have no choice financially and politically to pumping every barrel they could. This would increase supply even as demand fell, causing prices to crash.

This dynamic would drive prices down to lows which are widely considered "impossible" in an era of looming Peak Oil. Oil: One Last Head-Fake? (May 9, 2008)

What advocates of a smooth, seamless transition from the era of near-total dependence on fossil fuels to an era which draws upon many energy sources (a.k.a. "alternative energy") fail to grasp is the pernicious consequences of open-market pricing being set on the margins.

The reason is basic: there is no alternative as yet for oil--not even natural gas. In classic economics, the world will magically switch to some other alternative if prices get too high. The flies in this classic ointment are what I call the FEW essentials: food, energy and water: there are no "easy" alternatives and thus no upper limits on price.

As a result, oil and gas will experience increasing volatility in price as marginal supply and demand rise and fall.

Back in the late 1990s we were driving on back roads through the California desert when we happened upon a vast, abandoned solar power installation. Hundreds of steel panel mountings were laid out in a grid; the facility was fenced off and rusting.

Elected officials who supported subsidizing alternative energy projects are mocked as foolish enemies of the free market and their projects cancelled as costly boondoggles.

Then, a year or two later, oil prices spike up and interest in alt energy comes back. By then, of course, the financing, partnerships, manufacturing chain, permits and all the rest of the hideously costly and time-consuming process has been lost, and the new project must start from scratch.

By the time the project is about to begin construction, global recession once again drives down demand and prices fall below the level that is considered "the bottom line" at which alt energy is profitable. So the project is once again scaled back or abandoned.

The consequence of this dynamic are clear: alt energy will never "pencil out" long enough to reach critical mass, and thus there will not be any alternative system in place when oil supply falls far below demand. I've prepared this chart of the dynamic: 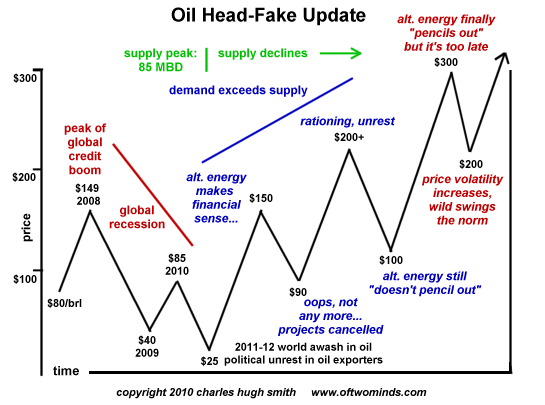 Forecasts of oil prices tend to assume supply and demand will incrementally adjust to maintain parity; standard-issue economists assume that new discoveries will keep supply if not rising, then at least stable at 85 million barrels a day.

These assumptions have zero basis in reality. As history abundantly shows, the price of oil (in any currency or in gold) experiences huge swings in price, and I expect these swings to become more frequent and increasingly volatile.

As for new discoveries--if oil is so plentiful, why are we drilling in deep water just to recover a mere three weeks' supply of U.S. demand? The truth is there have been no super-giant discoveries in over 40 years, and the fields which are trumpeted as "big" are pathetically modest. A billion-barrel field will take years to develop and pump, yet that is a mere two months supply for the U.S. which consumes 19 million barrels a day and pumps about 4 MBD domestically.

Free-market advocates tend to possess a quasi-religious faith in the market's "invisible hand" to resolve any shortages, but as I have described in depth in Survival+, the market does not price in every value; it ignores the value of "shared resources" such as air ("free" to pollutors but not to the government tasked with caring for its pollutant-sickened citizens) or species diversity (the last free wild tuna will fetch a handsome price on the Tokyo fish auction), and it does not price in the consequences of resources (the FEW essentials) which cannot be replaced within a short investment time scale.

The market will never make energy-hog zombie stand-by circuitry energy-efficient on its own because the "consumer" will never demand that extra 50 cents of power management circuitry, nor will the wholesalers or manufacturers. So 150 power plants in the U.S. burn mountains of coal every day just to supply the 5% of electrical power wasted on inefficient stand-by electronics in tens of millions of devices. Incremental conservation simply has no "market" appeal.

Will the financial "market" ignore huge price swings which cannot easily be predicted, and fund projects on a 10 or 20-year timeline? I doubt it; financial pressures to earn an immediate return on capital preclude such long timelines.

Am I advocating Central State ownership of energy production? No, but I am suggesting that communities might be better investors than the short-term financial markets in long-term energy projects. Somebody has to act on the fact that the market will serve up massive swings in price which will undermine any attempt to "price" the value of alt energy, and that "somebody" won't be a financial system geared to next quarter's earnings (which better be "blow-out" lest the enterprise be hammered by the "market.")

As a result, when the supply of oil falls irrevocably below demand, and prices skyrocket to $300/barrel and beyond, the alt energy capacity which could have been constructed over the past decade will be modest in size and woefully inadequate to meet demand.