Once upon a time financial innovation powered real growth and widespread wealth. Now it acts to concentrate capital and power and diverts capital from productive allocations into socially useless speculations.

The financial innovations of deficit spending, mass consumer debt and dynamic, open capital markets enabled the so-called Anglo-Saxon version of Capitalism to prevail and dominate. The question now is whether those innovations have run their course and degraded into facsimiles of those traits in the current U.S. economy.

One of the thicker books in my "leaning tower of Pisa" pile of books to read is God and Gold: Britain, America, and the Making of the Modern World by Walter Russell Mead.

Readers of the quarterly journal Foreign Affairs will be familiar with Mead, an accomplished historian in the status-quo vein--a judgment supported by the slightly triumphal tone of his book, which was published in 2007, just before the system he lauded collapsed in a heap. (Ironies always abound in the euphoric hubris of triumphalism, be it Anglo-Saxon, Chinese, Japanese, Russian, etc.)

Mead identified these key traits of the Anglo-Saxon financial system which led to its global dominance:

The key features of a transparent capital market (where credit/debt and stocks are offered and traded in an open market) are: capital formation/aggregation and the discovery of price via freely offered bid and ask.

2. The rapid industrialization of Britain and the U.S. offered "an urgent need for capital and an abundance of opportunities for profitable investment." In other words, capital was in great demand and hence savers were richly rewarded for offering their capital up to be borrowed by those seeking to expand production.

Opportunities for growth in what we would now call infradstructure were so abundant that borrowing capital at high rates of interest made excellent sense because the return on that investment was so much higher than the cost of the capital.

3. Open, regulated competition: "The competitive spirit of the English-speaking world was bound to a regulatory framework intended to heighten and sustain competition, rather than check and hinder it."

These traits offered a profoundly resilient and robust foundation for economic expansion and widespread growth of production and wealth.

Are these financial innovations still features of Anglo-American capitalism, or have they have been replaced by facades and tricked-up facsimiles which now benefit only an Elite adept at financial gaming? I would say yes.

1. It seems remarkably "obvious" that "efficient allocation of resources" has been replaced by "systemic misallocation of resources and capital." Trillions of dollars in precious capital was squandered on McMansions and malls built solely for speculation in a market deranged by central banks' ZIRP (zero-interest rate policy), excessive liquidity and the vast encouragement of leverage and pyramided debt.

2. Global over-capacity and over-production leaves few sound opportunities for capital to be invested when it isn't essentially free (near-zero rates).

Longtime correspondent J.F.B. recently submitted this link to an exploration of just this systemic over-capacity: The Collapsing Western Way of Life.

Even with the huge markets of China and India beckoning, the capacity to produce goods exceeds the demand of mostly low-income consumers. In the West and developed Asia, the consumer has little need for more than replacement goods. Over-indebted Americans below the top 20% upper-caste wage-earners cannot afford more goods purchased with debt, and their paltry savings place them at risk of growing old and poor at the same time.

Even the fast-growing "green power" sectors have exceeded organic demand. Demand will only increase if oil rises to $200/barrel and remains in the range of $150-$300/barrel for an extended time. Every drop in demand has the potential to cause the price of oil to plummet, quickly rendering alternative-energy projects potentially risky investments.

3. Low interest rates incentivize speculation. Savers get so little (less than inflation in many nations) they have been driven to speculate in real estate and stocks in a desperate and eventually futile race to maintain their purchasing power.

Power Elites with access to unlimited amounts of "free money" forcefed into the system by the Fed and other central banks are free to exploit various scams, frauds and embezzlements such as high-frequency trading, mortgage-backed securities, off-balance sheet derivatives, black-pools, etc. etc.

Rather than go to productive enterprises, this vast upwelling of state-enabled liquidity and capital has flowed into socially unproductive speculation and gaming-the-system which has enriched the top 1% who own/control the capital and the governance. Goldman Sachs skims $100 million per day without any break, week after week, while potentially productive enterprises migrate overseas where tangible innovation and production is welcomed. Ho-hum willingness to lend to "risky" real-world enterprises (it's so much less risky to speculate and get backstopped by the Government) from banks and stifling regulations add to the burdens of building a real-world, non-government contractor, non-financial enterprise.

4. The collpapse of moral hazard. Having incentivized wild speculation with zero interest rates and unlimited liquidity (not to mention allowing hedge fund managers to declare their $100 million+ pay packages as "long-term capital gains" taxable at a meager 15%), then when the inevitable happens and the speculative sand-castles melt away, the Federal government steps in and backstops the institutions and their managers from loss and failure.

The market, if left truly free, would exact a steep price called liquidation of remaining assets, and the excesses would "earn" their proper "reward." But with profits safely private and losses socialized (covered by taxpayers earning a fraction of the hedgies, traders, CEOs, et al.) then why would any Power Elite not game the system for maximum risk and return?

5. Competition has been squelched by State-Oligarchy cartels--in effect, monopoly capital in partnership with an increasingly invasive and fiefdom-dominated State. Due to repeated reader pleas and complaints, I am now on a very strict diet regarding the "S-word," but there really is no substitute word at this point, so I am allowing myself one useage this week: Competition, like transparency and "efficient allocation of capital," is now a mere simulacrum of real free-market competition.

While the captured politicos and Media worship loudly at the altars of "free-market" capitalism, transparent markets and competition, their obsequious bowing is all for show. Behind the flimsy facades erected for public display, the Power Elites control the rules and the game to their own benefit.

Capital and political influence grow ever more concentrated, and the misinformation and propaganda grows in parallel intensity to mask, cloak and distort this rising concentration of corrupting power. Behind the facades, the concentration of wealth and power has led to a corrosive stasis, a brittle state in which fundamental change is rendered impossible even as it is wrapped up and sold as "change."

The systemic rot is not addressed, because doing so would threaten the protected fiefdoms who benefit so mightily from the status quo. Instead, the consequences of the systemic failures and imbalances are being delayed, masked and pushed forward: "extend and pretend."

The rotted, brittle branch may look mighty, but its lack of flexibility and inner decay doom it to breaking catastrophically.

Cornered: The New Monopoly Capitalism and the Economics of Destruction

The Sovereign Individual: Mastering the Transition to the Information Age

The Rise of the Creative Class Life

Working Together: Collective Action, the Commons, and Multiple Methods in Practice

Empire of Illusion: The End of Literacy and the Triumph of Spectacle

Fab: The Coming Revolution on Your Desktop--from Personal Computers to Personal Fabrication

The Predator State: How Conservatives Abandoned the Free Market and Why Liberals Should Too

The Mirror Effect: How Celebrity Narcissism Is Seducing America

The Coming Anarchy: Shattering the Dreams of the Post Cold War

Buy signed copies of Chris Sullins' new Book 2 in the Operation SERF trilogy, Horsemen of the Red Hand and Survival+ The Primer for $24 (shipping included) and receive a free embroidered military-style patch that is based on the flag of a new group introduced in the story. More about the patch and a picture can be found on the Garden SERF blog.

For more about each book, please visit the Operation SERF Trilogy page and the Survival+ page.

This is $5 off the retail price and less than the cost of ordering the unsigned books online. (It's also less that the cost of two tickets to a 100-minute long bloviated summer "blockbuster" movie and a small rancid popcorn.) You can buy the signed books (only 20 available--please email me to confirm your order) via mailed check or PayPal.

Chris Sullins' Strategic Action Thriller Operation SERF was first serialized here on oftwominds.com. If you missed the story, here is a summary: 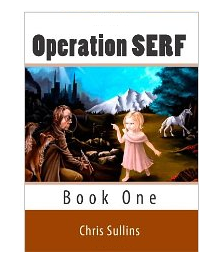 A Strategic Action Thriller set in the United States of America in the year 2023. After many years of economic depression, a terrorist act fractures the country. The stage is set for another Civil War as three factions battle for control of the pieces. The story takes place in many areas across the country, but centers on one extended family caught between the struggles of the rival factions. The reader will glimpse into the minds of the leaders of the factions, as well as common Americans, and travel along with them. "Operation SERF" is Book One of the trilogy. 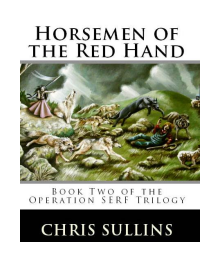 Book Two of the Operation SERF trilogy continues the complex saga of the breakdown of America in the year 2023. As the Shroud family continues to struggle with the threat of attack on their rural home in Michigan, powerful political factions conspire from Chicago and Phoenix to divide up what remains of the shattered nation. More pieces move on the chessboard as the military decides to leave the sidelines and become involved in the action in order to secure the President and restore order. During the course of all these events, a nebulous man named Mond continues to manipulate the strategic situation nationwide and a deadly man-made virus begins to make itself known.

Substitution options: If you already have a copy of Survival+ The Primer, I will send you a signed copy of Weblogs & New Media: Marketing in Crisis or any one of my six novels.