Volume and advance/decline lines offer a window into stock market strength and weakness.

Astute reader Deon N. recently suggested that an update of the stock market's "forgotten indicators" would be timely. Deon referenced a prescient entry from last February: Forgotten Indicators: Is the Stock Market About to Turn Up? (February 5, 2009) in which frequent contributor Harun I. provided a snapshot of the sock market through the lens of what he termed forgotten indicators: total volume and the advance/decline line.

In response to Deon's request, Harun has kindly updated these "forgotten indicators." To smooth out noise, he has plotted long-term (52-week) moving averages on the charts.

I have excerpted the recent history of these multi-decade charts for a closer look; click on the image to open a new browser window with the full chart.

Here is the NYSE advance/decline chart, with a few notes from me: 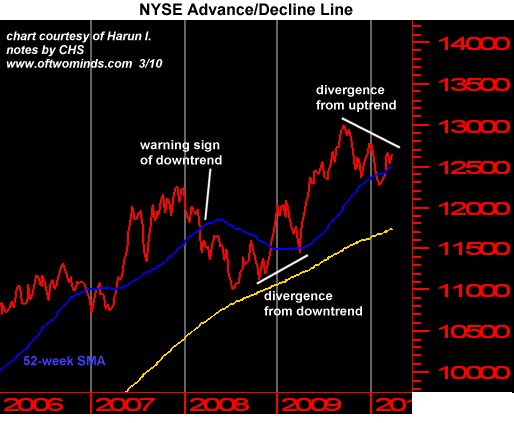 And here is the NYSE total volume chart: 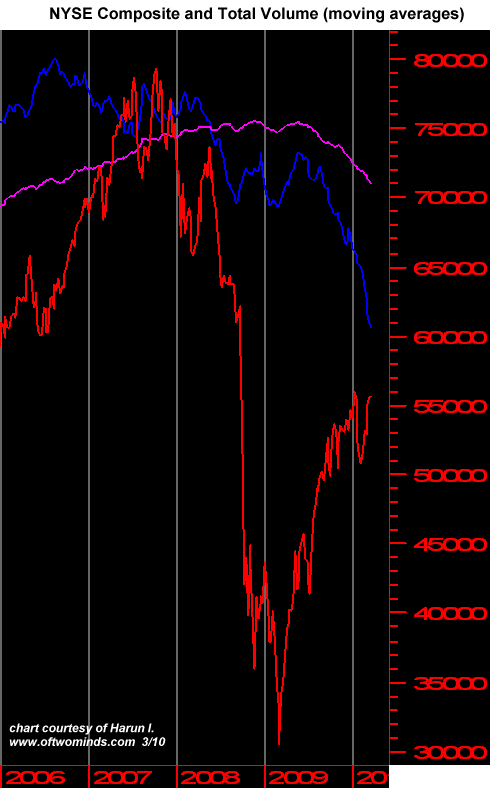 Harun provided this detailed commentary on the charts:

This goes along the lines of "just when I thought no one was paying attention". Bravo Zulu to your reader.

What we now have in the NYSE Advance/Decline Line, Cumulative Volume Index, and New Highs/New Lows Cumulative is, at this point, a reversal of first quarter 2009. The NH/NL and the CVI are continuing to advance but the A/D Line has stalled since Sept '09 and dipped below its 52-week SMA before regaining a toehold above the SMA. This has created a divergence in these indicators. This is a warning sign that says, "pay close attention." To 'me' a call to action is changes in the behavior of market participants that shows up in the price bars especially when they occur at virtual and physical support and resistance levels.

Harun now relates the A/D and volume charts to a price chart with Bollinger Bands. You can call up such a chart in any charting program/service and follow along.

Looking at the DJIA quarterly (not shown) we can see the head fake that occurred at this level of trend in 2007. Upper and lower Bollinger Bands, according to their creator, indicate overbought and oversold levels. In 2007 the first warning came when the third quarter took out the second quarter high but was unable to hold above that level and even collapsed below the second quarter open. This occurred at the upper BBand. Confirmation came in the first quarter '08 when price plummeted taking out the previous quarter low and penetrating the 2007 first quarter/annual low. Head fakes, like most failed formations, tend to extend and this move extended all the way to the quarterly lower band.

At the bottom of the move we saw bottoming tails on the 2008 4th quarter and 2009 first quarter price bars. With price both at the lower band and physical support 2002/2003 and a NYSE line that had not confirmed the lows, it was time to pay close attention. Second quarter '09 was an inside bar that was confirmed by the third quarter taking out the previous high and then the first quarter high.

Trend change could have been detected at lower levels of trend but starting at the monthly or quarterly level eliminates noise.

At present we have a stalled A/D Line and price approaching quarterly middle band resistance. How price behaves in this area will give vital clues as to opportunities that may arise. If the second quarter takes out the first quarter high and closes above the middle band then the probability increases that price will test the upper band. If there is weakness at the previous high or middle band that results in a failed rally there may be a downside opportunity. With NYSE Total Volume raising its own red flag it is time to pay close attention.

I encourage your readers as I have encouraged you to annotate the story of each price bar with their favorite indicator in multiple time frames. It greatly enhances one's ability to spot low risk opportunities.

Thank you, Harun, for this update.

My notes on the NYSE A/D line chart are self-explanatory. When price moved decisively below the advance/decline moving average in early 2008, that was an unmistakable warning sign of weakness to come--a full six months before the wealth destruction that occurred late in 2008.

Yet even as the market plummeted in 2009, the A/D line was diverging by hitting higher highs and higher lows. This presaged the major rally that topped out (in terms of the A/D line) in September 2009.

Now the A/D line is tracing out a divergence from this uptrend as it makes lower highs and lower lows. If the A/D line tends to signal a change of trend in price about six months ahead, then we are coming up on a price decline (9/09 + 6 months = 3/10).

The Wall Street truism is that "volume is the weapon of the Bull." If so, the Bull has been stumbling since mid-2006. Note how the blue moving-average line of volume fell sharply in early 2008, presaging the price collapse to come, and how it rebounded in early 2009 as the market rallied from the March 2009 lows.

Yet volume essentially collapsed in mid-2009, even as price continued its steady climb to recent highs. That divergence reveals fundamental distribution: players are selling madly as price moves up. The classic description of distribution is strong hands (insiders) are selling to weak hands (marks and shills who bought into the propaganda about the "strong recovery") who will be left as bagholders when price collapses.

As always please read the HUGE GIANT BIG FAT DISCLAIMER below to refresh your understanding that this is not investment advice, it is simply the freely offered ramblings of an amateur observer. By way of disclosure, I am short BAC and APC via puts, short the SPX via an inverse exchange-traded fund and heavily in cash. I could get creamed in these positions so please note once again that this is a disclosure, not advice, and it is offered so you can assess if what I'm writing here aligns at all with my own speculative positions.