In only three more years you're talking $20 trillion in public debt for the USA and a GDP going nowhere fast. And what does that look like in terms of the S&P 500? Courtesy of frequent contributor Chartist Friend from Pittsburgh, here is the SPX charted against total public debt. You'll notice it's crashing: 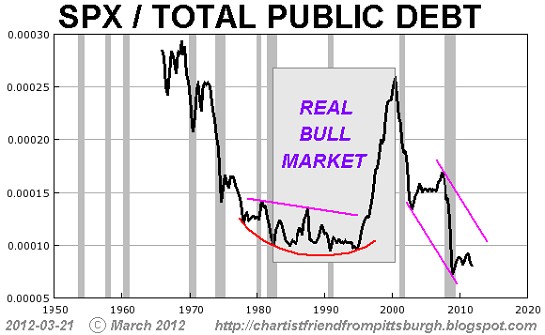 What this chart reflects is another aspect of the death spiral I described yesterday in The One Chart That Says It All: when depreciation outstrips new investment, then productivity, income and profit all decline. As interest on skyrocketing debt rises, then more income must be diverted to service debt, leaving less for new investment. That sets up a positive feedback loop, i.e. death spiral.

Here's how rising Federal debt creates a death spiral in the economy. As Federal debt skyrockets, the cost of debt service rises, even at super-low rates of interest. That means taxes must rise, because no constituency will allow its share of the Federal budget to decline by more than a symbolic amount. Higher taxes means there will be less money available for new investment, and the enormous sums of Federal debt that have to be sold crowds out other investment.

Interest rates have been manipulated lower for a few years via the Fed buying Treasuries with freshly printed money and a perceived "flight to safety," but eventually the Treasury will have to compete for investors' cash, and rates will rise.

The Federal government already borrows more per year than most country's gross national product: about $1.5 trillion a year. You can look it up here: Public Debt of the U.S. That's roughly 10% of the U.S. GDP, added to public debt each and every year.

Ignoring the politicos' shuck and jive about "balancing the budget" as tiresome political theater, let's multiply 3 X $1.5 trillion = $4.5 trillion, and add that to $15.57 trillion: in three years, Public Debt will top $20 trillion, on the way to $30 trillion.

In constant (2005) dollars, the economy actually shrank in the three year span of 2008-2010 and is back to 2007 levels. That's what we bought with $6.1 trillion in additional debt and Federal spending.

Just as a refresher:

In 2011, the Federal government borrowed 42% of its expenditures.

As the recession ended in mid-2009, we're almost three years into a "recovery."

Over 40% of Federal spending is Social Security and Medicare/Medicaid. With Baby Boomers retiring en masse, 2 million new beneficiaries are added every year: Social Security system (Wikipedia). Add in Defense spending and roughly 2/3 of the Federal budget is politically untouchable. Then add in 11% debt payments. There is little room to move here politically, as every program of any size is a "sacred cow" or "third rail."

The Social Security Administration states that 157 million people pay into the system, and 56 million people are receiving benefits. This 3-to-1 ratio may seem sustainable, but we have to factor in that 38 Million Workers Made Less Than $10,000 in 2010 Equal to California's Population, while 24 million contributors make less that $5,000 annually.

A program that routinely pays $20,000 a year to higher-income recipients and collects $700-$1,000 a year in income from tens of millions of workers who are in line for benefits is not sustainable. If we factor in the low Social Security taxes being paid into the system by low-income workers, then the ratio drops to about 2 workers for every beneficiary.

The demographics are not encouraging.

Taxes of all sorts will have to rise. Cuts will be symbolic because the political pain will be unbearable. Most observers note that increased taxes lowers consumption and that will hurt the economy, but lower consumption is the least of our problems. The real problem is there is no end in sight to skyrocketing public debt and interest on that debt, and that double-whammy of higher taxes and competition for scarce investor cash will erode the capital available for productive new investment.