On Oct. 26 I called for a decline in the stock market and a rise in the U.S. dollar. By random happenstance, both occurred. Now I expect the Empire to Strike Back for at least a week or two.

By pure coincidence my call last Monday for a rise in the U.S. Dollar and a decline in the stock market corresponded with the reality of the week's market action.

Now I expect The Empire to Strike Back and stocks to recover--at least for awhile. As correspondent J.B. recently observed in a private email, this stock market rally from the March 6 lows is about the only accomplishment the Obama Administration can claim.

(Saving 640,239.67 jobs--Mertle G. in Houston got hired back at 2/3 time--is not much of an accomplishment when you've thrown hundreds of billions of dollars into every nook and cranny of the U.S. economy--an economy which still has almost 130 million jobs.)

Thus we can anticipate the Empire will defend its "accomplishment," as will all the other central banks and governments.

One key thread in Survival+ is an understanding of feedback loops. To expect the U.S. stock market to melt down in a semi-crash is to ignore the mighty feedbacks resisting such a collapse.

Sentiment should worry Bears (those anticipating a prolonged downturn). Suddenly even the cheerleading MSM and financial media is filled with stories of anxiety and caution--the settings not for decline but for a rally.

As we see below, the "fear index" VIX has skyrocketed. It's as if "everyone" now expects the long-awaited "correction/meltdown" to commence. So with everyone lurching to the short side of the boat, will the market reward all those punters with more decline? More likely it will rise up and severely punish those who bet against the Empire. 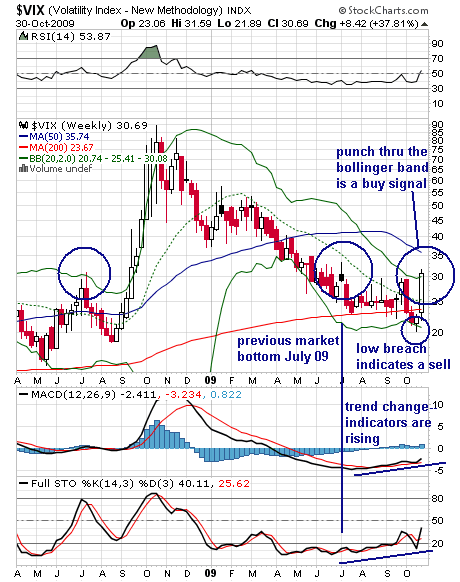 I continue to see last Monday's reversal as a harbinger of a trend change. I do suspect a bearish market is taking shape, and the VIX chart does suggest a slow trend change is taking place (rising indicators).

But short-term, the breach of the upper Bollinger band usually means the market reached a panic peak--a buy signal.

This suggests market players are skittish and ready to sell at the slightest whiff of a downturn--just the sort of market which sets up a massive short-covering rally once the panic subsides.

A trending Bear market reveals itself not in panic but in complacency, and a sharp spike in the VIX is anything but complacency. Hence my skepticism that Bears will be rewarded here with a crash, as many Bearish commentators are predicting. Maybe--but it's rarely that easy: just jump on the bandwagon and makes millions.

This rally continues to be the most hated rally in history, and thus we might ask what would thwart the greatest number of expectations: a widely expected drop or a sharp reversal to previous highs or even new highs?

I am also skeptical of a sudden plummet because markets rarely head up or down in straight lines. Thus probabilities favor a re-test of recent highs, a marginal new high or some approximation of a double top.

Just about every analyst typing out commentary has noted the strong technical pull of 10,300 for the Dow Jones Industrials (DJIA) and 1121 for the S&P 500. A good case can be made that the Dow should rise up to 10,700, as that is the 50% retrace of the entire Bull market from the 2002 lows.

In other words, it would be "normal" from a purely technical view for the Dow to climb another 1,000 points here and at least touch 10,700 before turning down. The fact that the number of voices calling this likely has fallen to near-zero is all the more reason to expect one more thrust higher to decimate the itchy-trigger finger Bears and sustain the illusion that the Empire has succeeded in restarting global growth.

Let's take a look at the Dow Jones Industrials: 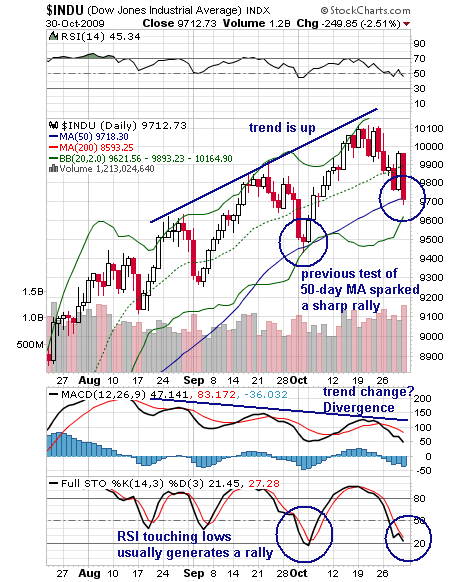 Even as an amateur observer who sensed a trend change last Monday, I have to confess there is only one element of weakness in this chart: the declining MACD is divergent from the rising price trend. Eventually, this divergence will be resolved, but such resolutions can be leisurely indeed.

The rest of the chart remains bullish. For the chart to turn Bearish, price would have to close repeatedly under the 50-day MA, attempt to regain a bullish position above the line and fail conclusively. Until that occurs, punters should be wary of the Empire(s) defending their beloved global rally. For they have precious little else to feed the view that the global economy is actually on the mend rather than weakening beneath the phony facade created by unprecendented governmental borrow-and-spend stimulus.

THIS IS NOT INVESTMENT ADVICE, OR ADVICE ON ANYTHING. Please read the HUGE GIANT BIG FAT DISCLAIMER below. These are the freeely offered mumblings of a rank amateur, period. By way of disclosure, I sold my short positions and went long via DIA calls on Friday. My timing wasn't perfect but I don't aim for perfection, just an account that is in the green rather than in the red.

Permanent link: The Empire Strikes Back