Healthcare" a.k.a. sickcare is not about health at all, it's about profit and power. The State and the sickcare cartels have partnered to transfer more of the nation's wealth to their Power Elites.

One of the primary themes of Survival+ is that the State and the Plutocracy are partners, and their joint goal is to divert an ever-greater share of the nation's income into their own pockets.

From the Survival+ point of view, all the ideological positions on "healthcare" which are being sold like commodities are laughably detached from reality. "Healthcare reform" has nothing to do with either socialism or capitalism. Socialism is the Veterans Administration system (owned lock, stock and barrel by the government and run by the government) which offers remarkably cost-effective if basic care to millions of vets, and capitalism is cash-only clinics like those offered in Mexico, India and Thailand and in some Wal-Mart walk-in clinics.

The entire "healthcare reform" enterprise is not about providing care to all--that is the sales pitch. It is about milking the entire populace so more of the national income is transferred to the "healthcare" cartels and State (central government) Elites.

Here are the three key realities which are not addressed by "healthcare reform":

1. The "healthcare" cartel (and thus its partner the State) is not interested in health because health is horribly unprofitable. People who eat well and are mentally and physically fit have no need for costly procedures, treatments, tests and pharmaceuticals, hence they cannot generate revenues or profits.

Managing diseases is what's profitable, so the system is oriented not at prevention or nurturing health but at enabling chronic disease which is very profitably managed with pharmaceutcals, surgeries, etc.

2. Once the connection between service and customer is broken and the money to pay for all products and services is printed or borrowed in essentially unlimited quantities, ontologically (inherently) there are no possible price controls. This is why an elderly gent like my friend's father can enter the hospital with a non-life threating issue (gallstone), receive treatment which didn't really resolve his health issue and then Medicare is billed $120,000 for one week of "care" regardless of the efficacy.

When the service is "free" (that is, payment is borrowed/printed in unlimited quantities), then the cost of care will necessarily push up to the ultimate limit of the system's ability to pay. Medicare and Medicaid already exceed the Pentagon's budget, and they are growing three times faster than the long-term trend rate of the U.S. economy.

3. There is no "fair" way to ration care; the U.S. simply rations it by essentially random "legal lottery" payouts/jackpots/penalties and other regulatory means. The bottom line is "healthcare for all" without limits is unaffordable everywhere--it is simply more unaffordable in the U.S. system. The wealthy in rationed-care systems simply opt out and go buy "unrationed care" elsewhere, cash on the barrelhead.

The dirty little secret of supposedly "model" State healthcare plans in Europe and Japan is that they are running up against the limits of what those economies can afford. If you disagree, go ask the State finance ministries of France, the U.K., Germany and Japan for their 10 and 20-year projections of national healthcare costs.

No nation can increase healthcare spending 6% while its underlying economy grows 2%. In a mere 8 years, healthcare costs will rise over 50% while the GDP will rise (at best) 15-20%. That is the essence of unsustainability. 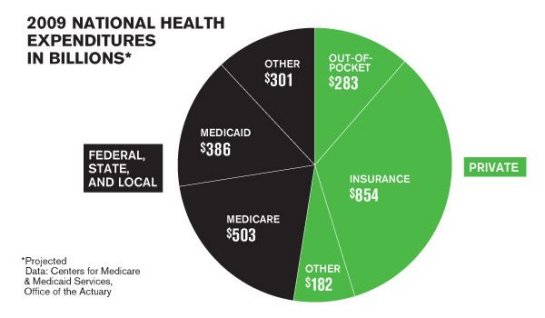 The U.S. spent an estimated $2.4 trillion on health care in 2008, about 16.5% of gross domestic product and a 6% increase from a year earlier. Medical care prices are rising faster than overall inflation, and the burden on consumers continues to grow.

When everything is "free to all" then technologies and medications quickly reach marginal returns: yes, this drug is only effective in 15% of the case, and yes, it costs $10,000 a month, and might actually hurt some patients; but since the State is paying for everything, why not give it to everyone who might be helped? And if it's restricted, then isn't that rationed?

The "healthcare" cartels' goal is to carve off a greater share of national income for themselves. This isn't capitalism; it's monopoly capital-crony capitalism, the very opposite of free-market capitalism. The State's political class is a willing partner in this transfer of wealth to Elites because it welcomes the hundreds of millions of dollars in donations offered up by tort attorneys, Big Pharma, and all the other players milking the "healthcare" system for billions.

So who ultimately pays for "free" "sickcare"? The productive middle class and working poor. Healthcare which doesn't actually improve health but simply profitably manages chronic illnesses is in essence a stupendous tax on the productive class of the nation. The healthcare cartels are delighted that "healthcare" has climbed from 6% of GDP to 17%, and they will be delighted to see it rise to 20%, then 25% and 30%, until at some point it bankrupts the nation, as it most certainly will for the above reasons.

Until the State collapses in insolvency, "healthcare" acts as a giant machine which diverts money from the middle class and working poor into the coffers of the sickcare cartels and their State-Elites partners.

You want a system that works? Then depoliticize and de-cartel the system entirely. Jettison the entire sickcare system and revert to cash-only for every product and service, and offer a voluntary VA-type system which people can opt into if they choose to pay the insurance and co-payments (which VA does not have) and live with the defacto rationing of long waits and basic care which is limited by the budget alloted. There is no "entitlement," only whatever care which can be distributed for a given amount of money. Thus it's not the budget which can rise but the efficiency of the system in doing the most possible with a set sum of money.

This is the only sustainable way to provide care without bankrupting the nation.

These two systems--"pure socialism" and "pure free-market capitalism"--can co-exist quite amiably as long as people get to choose from a range of imperfect choices. If health were more profitable (to providers and to consumers) than managing disease, then entirely different choices and incentives would arise.

Get Survival+: Structuring Prosperity for Yourself and the Nation on amazon.com or in ebook and Kindle formats. A 20% discount is available from the publisher.

iPod and iPhone owners: Read Survival+ on your iPod or iPhone by downloading the Kindle app and then buying the book from the Kindle store. Here's how.