Since fossil fuels are the essential commodity for modern civilization, reckoning their "cost" is critical.

At long last Survival+: Structuring Prosperity for Yourself and the Nation is now available on amazon.com and in ebook and Kindle formats.

Fossil fuels can be regarded as "cheap" or costly, depending on the context. How much energy does it require to extract and process the oil and gas, and then clean up the toxic mess created by the extraction, processing and transport?

Yes, hydrocarbons are toxic. Perhaps that should be the initial context of calculating the "cost" of fossil fuels.

Frequent contributor Gene M. submitted this important article from Counterpunch.com: The Inflated Promise of Natural Gas (Counterpunch.com is asking readers for donations now lest they shrivel. I kicked in a few dollars, as we need an independent media so very desperately.)

It turns out the "happy story" presented in the mainstream media/propaganda stories listed here yesterday left out all the toxic bits of the "abundant cheap natural gas" bonanza. Here's a taste of what was not covered in the MSM:

Meanwhile, major fracturing-fluid manufacturers refuse to reveal their products ingredients. (Industry leader Halliburton maintains that to compel it to list the chemicals in its products would be an unconstitutional taking of its intellectual property.) Investigators have managed to identify many of compounds used in fluids, and many are toxic. Some, including benzene, formaldehyde, 1,4-dioxane, ethylene dioxide and nickel sulfate, are confirmed carcinogens.

The "happy story" is that the wells are miles deep and thus beyond ground water. But much of the water and chemicals pumped down a mile is returned to the surface and must be dealt with as industrial waste. So much for being "cheap."

Correspondent Daniel D. checked in with this eye-opening account:

Just read your post about oil and frac technology and thought I'd chime in with my two cents. In summer 2008 I was a student working for a woman in a McMansion neighborhood in the Dallas/Ft. Worth area. Ft. Worth (and much of Texas) is under the influence of natural gas co's who have recently developed a technique for drilling beneath urban areas. (We mounted a campaign to stop them from putting a well on the neighborhood's golf course and in the course of events discovered evidence indicating that some of the Homeowners' Association board members were probably on the take... But that's another story)

Back to your post: This stuff is anything but cheap OR safe. They have to buy mineral rights from every land-owner in an urban area or pay residents royalties -- not the same as dropping a pipe in a supergiant Saudi reserve. Neighborhoods caught on and learned that if they cooperated they could jack up their prices.

And the environmental damage is severe -- Parker County's water comes out of the tap ready to burn... videos on Youtube show news stories where the anchor lights a glass of tapwater on fire. As for the fraccing chemicals, they are conveniently labeled "proprietary" and so do not need to be disclosed to authorities. This stuff is not the way for us to go in the future, just an unnecessary extension of our energy past ...

Thank you, Gene and Daniel. The entire "natural gas is abundant, cheap and clean" story which is being hyped and propagated by the MSM is the purest propaganda, as it leaves out all the practical obstacles and the punishing costs of dealing with the toxins pumped out with the gas.

Just in straight money terms,let's extend our inquiry into the cost of oil by pricing it in non-U.S. dollar contexts: euros and gold. Frequent contributor B.C. generously provided this chart of oil priced in euros, adjusted for consumer price fluctuations (year 2000=100), plotted against the GDP of the Eurozone:

Strikingly, even when priced in euros, oil is rising in cost even as the Eurozone GDP languishes at recessionary levels. Many commentators believe that spikes in the cost of oil are the defining factors which trigger recessions. If this has any merit, we might ponder what effect the sharp rise in oil prices even in euros portends for the global economy.

I asked frequent contributor Harun I. for a chart of the oil/gold ratio, and he graciously submitted this chart: 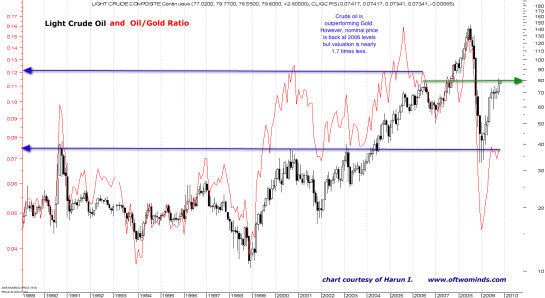 Oil priced in dollars is in black, and the gold/oil ratio is in red. Many analysts state this ratio in terms of "one ounce of gold buys X barrels of oil."

In other words: as all currencies depreciate against gold, then the cost of oil priced in those currencies rises even as it remains constant when priced in gold. But like all commodities, gold and oil fluctuate in relative value as well.

So are oil and natural gas "cheap" or "expensive"? That depends on what they're priced in and who's paying the hidden costs of the vast industry which extracts, processes and transports these fossil fuels.

Lastly, we might place the value of gas and oil in this context: how much will we be willing to pay if and when they become scarce?

"Just remember... the 5th of November." Have a pleasant Guy Fawkes Day.

Permanent link: Is Oil "Cheap" When Priced in Euros or Gold?

iPod and iPhone owners: Read Survival+ on your iPod or iPhone by downloading the Kindle app and then buying the book from the Kindle store. Here's how.