Now that the carefully crafted pre-election rally has reached its desired goal, the market is at a crossroads: can QE and bogus employment statistics juice another equities euphoria, or is Goldman Sachs now short the market?

As I predicted in July, the Plunge Protection Team and its proxies drove a low-volume rally up all the way through the elections. The primary mechanism (other than the usual "ramp and camp" pre-market manipulations via proxy purchases of the SPX futures) was to destroy the U.S. dollar with endless propaganda about QE2, the Fed's quantititaive easing plan to be formally announced today. Notice the strong inverse correlation between the crashing dollar and rising equities:

Gosh, if only they could crush the dollar to zero, then equities would really soar! Uh, right... as for the real economy--never mind that; stocks disconnected from the real economy a long time ago....

I have long suggested the rally might have legs through the election:

Will the Stock Market Crash Before the Mid-Term Elections? (July 19, 2010)

Is it really too much to imagine Geithner et al. getting private calls from the White House along the lines of, "Guys, we could really use a hand here with the stock market." After all, propping up the market as a proxy for the U.S. economy has been the strategy all along, and the worst time for the strategy to collapse in a heap is right before the mid-term elections.

The key target, if it were my job to engineer a rally that would last longer than a few days, would be the 1,110-1,130 level of the SPX. Juicing the market above those levels would cause all but the hardiest Bears to cover, and it would trigger gigantic waves of black-box buying as the key levels of resistance would be broken.

Kudos to the Plunge Protection Team for a brilliantly engineered and executed rally on record-low volume in months which are historically bearish. You guys did a remarkable prop job for the incumbents, and the Democrats who survive the mid-term election will be sure to reward your hard work on their behalf.

Had the stock market tanked in September and October--the mind reels at the mayhem which would have been inflicted on the incumbents.

Speaking of tight correlations: correspondent Clark P. alerted me to a startlingly tight inverse correlation between the BXN and the BXN-NDX (Nasdaq 100) ratio. Here is an explanation of the BXN:

The new CBOE NASDAQ-100 BuyWrite Index (BXN) is a benchmark index that measures the performance of a theoretical portfolio that owns a portfolio of the stocks included in the NASDAQ-100 Index®, and "writes" (or sells) NASDAQ-100 Index (NDX) covered call options.

A "buy-write," also called a covered call, generally is considered to be an investment strategy in which an investor buys a stock or a basket of stocks, and also writes (or sells) call options that correspond to the stock or basket of stocks. This strategy can be used in an attempt to enhance a portfolio's risk-adjusted returns and reduce its volatility.

Note how the ratio of the BXN/NDX is hitting extreme lows while the BXN is hitting highs, along with the NDX:

Clark was also kind enough to forward a chart which show mutual fund cash is at extreme lows not seen since the last big top in the market, and a Pragmatic Capitalist report that mutual funds are "all in". Thank you, Clark, for the charts and these reports that show the cash-on-hand gas tank of mutual funds is essentially empty. (As I have reported before, retail investors have pulled $92 billion out of U.S. equity mutual funds this year. That reveals their level of trust in the PPT's rally.)

Whether the extreme reading in the BXN-NDX marks a possible reversal or not, I cannot say, but as Mish reported, the AAII bullish sentiment is at an extreme: 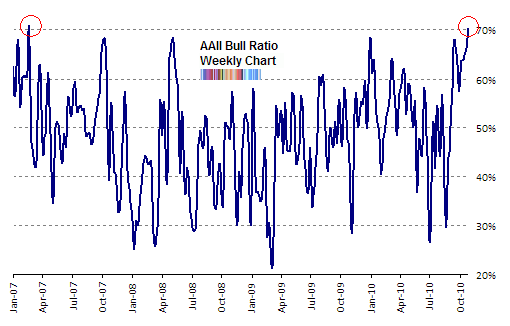 Can the market ignore these extremes of sentiment? Of course it can. On the other hand, we might wonder if various powerful Wall Street players are not betting against the action they have floated all summer: that is, if Goldman Sachs et al. might be heavily short this euphoric market, in which case the next engineered move would a "surprising rout" which sent the market reeling.

How much upside is left in this market? A few points? How much downside is there below all those air pockets? A lot.

Risk and return, baby, is the name of the game--especially if you have your thumb on the slowing edge of the roulette wheel.