Commercial real estate is a house a cards about to collapse on multiple fronts for deeply structural reasons.

Correspondent Thomas H.submitted this fascinating story: 'Pop-up' stores are becoming an overnight sensation. (Los Angeles Times) The basic idea is that retailers are not signing 5-year leases anymore--they're signing 20-day leases for 'pop-up' stores which have the lifespan of an insect and low costs for retailers seeking to unload discounted inventory in a hurry.

The model has been well-established with "holiday theme stores"--retail operations which sell goods aimed at a specific holiday such as Halloween for a few weeks prior to the holiday. (Never mind that the Halloween frippery is massively overpriced--doesn't anyone make their own costumes any more?)

The real surprise is major retailers such as The Gap and Toys R Us are using the "pop-up" model:

These quickie retail operations -- known as pop-ups -- are showing up throughout Southern California and around the nation, filling in the gaps at recession-battered shopping centers for a fraction of the regular rents.

Once limited to seasonal shops and dusty liquidation centers, pop-up stores are now being opened by some of the nation's biggest retailers.

It's a trend that could reshape the nation's retail landscape if it continues, diminishing the power of commercial landlords and making it easier for merchants to test new locations and products with little commitment.

Gap Inc. recently opened a pop-up shop on trendy Robertson Boulevard to promote its new premium denim line; celebrities including Halle Berry and Ashlee Simpson-Wentz turned out to the shop's launch party. Toys R Us Inc. is setting up about 80 temporary toy shops nationwide, including several at upscale malls previously unavailable to the chain. J.C. Penney Co. touted its back-to-school offerings through interactive pop-up displays in half a dozen Southern California malls.

The end of the recession, he predicted, would not necessarily bring an end to the model.

Uh, what "end of the recession"? Just in case retailers didn't get the message: Mad as hell, consumers dump credit cards; Balances tumble as fury toward issuers swells.

With unemployment at a 26-year high of 9.8%, many consumers have no choice but to tighten their belts. But more and more, consumers are closing their own accounts and choosing not to use credit cards because they're just plain angry.

"There's an enormous amount of backlash against the banks," said Dennis Moroney, research director at Tower Group. "It's like in the movie 'Network,' people are saying, 'I'm mad as hell and I'm not going to take it anymore.'"

Credit-card holders are so irritated that 32% of them told Consumer Reports in a recent survey that they have paid off or closed a card in the last 18 months. Half of those who canceled did so because they were peeved by recent actions credit-card issuers took, such as cutting limits, hiking interest rates, jacking up fees or imposing new charges.

At the risk of being tiresome, let's go over the foundation of the U.S. economy once more:

2. Expanding credit and borrowing are the lifeblood of consumer spending.

4. Banks are functionally insolvent and are not lending as they did during the bubble boom.

5. Millions of Baby Boomers have realized that their current assets and savings enable a retirement in:
A. a sturdy cardboard box
B. a camper/20-year old RV on "The Slabs" (or equivalent)
C. Aunt Matilda's house if Auntie has the good grace to croak off fairly soon.

Thus this is no "dip in consumer spending"--it is a generational sea change with no end in sight.

Not only are consumers increasingly unable to borrow or unwilling to do so, but much of the overbuilt retail sector sells items which are superfluous (and that's the polite description). I have prepared a graphic depiction of the earthier truth: 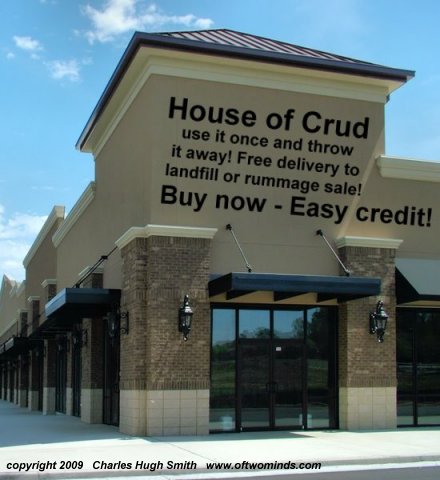 It's not just retail that is doomed, of course; the hotel/hospitality sector is massively overbuilt and overleveraged. Everyone, it seemed, was chasing the "luxury" and business traveler. Now that the cold wind of reality is rising, owners are discovering that the hotel they bought for $250 million with a $230 million mortgage is worth about half that amount--at best: Hawaii Hotels Face Fewer Visitors, More Debt.

As for commercial office space--ponder this data point. It was recently announced that Internet darling Twitter leased more space in San Francisco as it was expanding its 30-person staff to maybe as high as--gasp!--100.

Let's follow that to its conclusion: the "hot headline" tech companies have vanishingly few employees, and a significant majority of them can work partly from home or from some other remote location. They don't need a cubicle or a conference room or an office at all.

Even mighty Google employees about 16,000 people globally--perhaps a tenth of a major industrial company like GE and not much more than the student populace of a moderate-sized state university.

And many of these people can work remotely as well. The truth is you don't need huge office towers for the new economy.

We can summarize the commercial real estate market graphically: 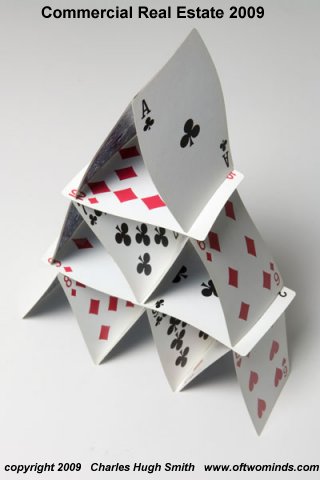