If we distill down various historical patterns, we end up with three likely models of future stock market gyrations.

No model predicts reality precisely, but since human psychology runs in certain patterns, we can make reasonably educated probabilities that future stock market moves will track one of three basic models.

1. A return to a Bull Market

2. A Bear Market rally which leads to a decade or more of sideways action

3. A Bear Market rally which runs out of steam, leading to new lows

I've traced these likely options out on this chart: 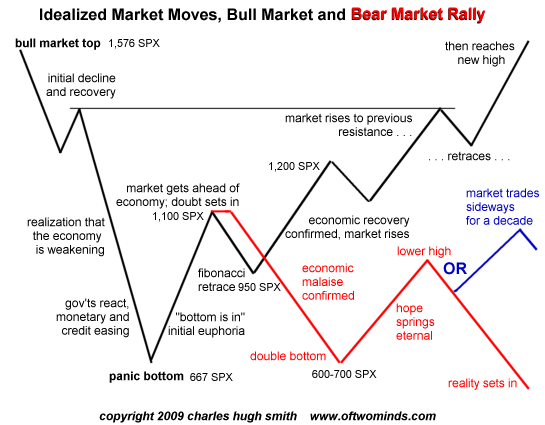 Longtime readers know that I consider the Bull Market the least likely for the following reasons:

2. The foundation of middle class wealth--housing--is mortally wounded. Just because a fellow with 23 arrows sticking out of his back staggers to his feet is not evidence that he is now well.

4. The foundation of the U.S. economy, the 70% of GDP private consumption, is mortally wounded. The consumers' asset bases are destroyed (housing and retirement accounts), costs are rising (healthcare and taxes, for those who still have income), the job base of the U.S. is in structural decline and the credit which enabled limitless consumer spending is impaired/crippled.

All of these are structural in nature and not reversable in a few months of "pump priming," regardless of the effort made to prime the pump of future consumer spending.

Nonetheless, we have to be alert to the possibility that an implosion of the U.S. dollar or inflation could drive the stock market to new highs even as the nation lost purchasing power. Many are now expecting the dollar to essentially collapse. If that were to transpire, the purchasing power of Americans would decline proportionately and the cost of oil and credit from abroad would rise commensurately.

Even as Americans were impoverished by this collapse in their currency, the stock market might respond with euphoric vigor.

Though I reckon hyperinflation unlikely from what I see right now, many do consider it likely (or inevitable), and such a bout of hyperinflation could easily drive stocks to new highs even as the nation was impoverished by rising commodity prices and plummeting purchasing power.

Since I don't rate any of these scenarios likely--a new "real" Bull Market based on skyrocketing real revenues and profits (i.e. not just based on a falling dollar), the implosion of the U.S. dollar or hyperinflation--I consider a raging Bull Market (nominal or real) to be the least likely scenario.

Since markets often re-test lows (double-bottom), I consider that scenario very likely. Many observers are claiming the March 2009 lows are the one and final bottom from the October 2007 highs.

Perhaps, but even as recently as the 2002-03 period, the market surge (euphoria) off the supposedly "final bottom" ended up retracing to that same level (more or less) before starting a sustained move up.

But 2009 is not 2002 or 1992 or 1982 or even 1975. The financial underpinnings of the entire U.S. economy are coming apart, and a few months (or years) of quantititive easing and manipulation cannot restore the shattered foundation.

When this reality hits, then the "crash to a new low" scenario becomes likely.

But we also have to be open to the possibility that essentially endless quantitative easing and Federal stimulus spending (deficit spending) could prop up the market, which would lead to the "blue" scenario in the chart--a decade or two of sideways action.

In this scenario, periodic rallies are sharp and so are the resultant declines. Japan's market in the 1990s and the U.S. market 1966-1981 offer historic maps for this sort of "going nowhere" markets.

If the Fed manages to sustain a whiff of inflation, say, 2% a year, then a stock market which goes nowhere for 10 years ends up losing 20+% in purchasing power even if the nominal price ends up unchanged.

Is "this time different"? Perhaps. The government and media propaganda has successfully masked the structural realities for the past seven months, but reality has a nasty way of intruding on fantasies at the most inopportune times. This "recovery" of "green shoots" is nothing but government-funded fantasy.