The consensus is nearly universal that the dollar is doomed. Perhaps there are other forces at work beneath the surface.

It seems a given now that the U.S. dollar is doomed to either slow depreciation or devaluation. Perhaps--but the consensus seems too easy. Yes, money supply and liquidity have exploded as the Fed and Treasury fight deflation, and yes, history suggests expanding the money supply debases the currency.

That the dollar has been debased is clear enough if we measure the dollar's value in gold. Priced in gold, the dollar has lost over 2/3 of its value in a mere decade. Courtesy of contributor Harun I., here is a chart of gold: 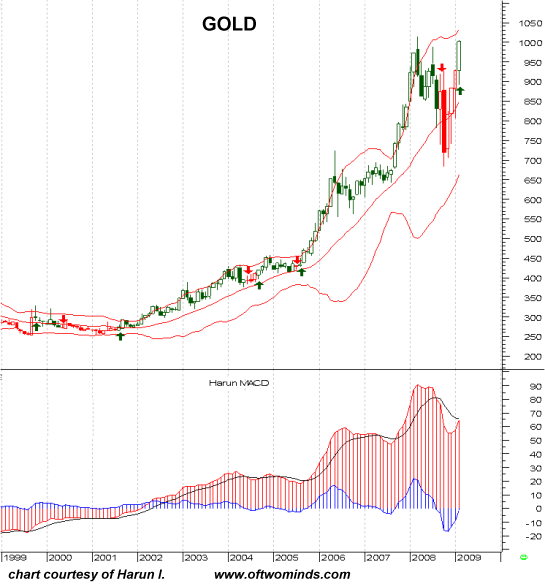 Correspondent Jim S. observed that this depreciation has been a trend for the entire 20th century:

At the barbershop, the barber asked me if the dollar was at risk of failing. The dollar is not at risk of being wiped out, IT ALREADY HAS BEEN WIPED OUT, and the world is moving on. From 1789 to 1912, the dollar appreciated a full 11%. From 1912 to 2001, it has lost 95% of its value under the fractional reserve banking system of the Fed Reserve, massively overleveraged further since the inventive application of credit derivatives since the 90s.

In 2001, a dollar index of $1.2 (as charted by the Dollar Index) existed and now it is at about .76. This recent drop results in a dollar loss greater than 95% from the 1912 value. The dollar HAS been destroyed in the proper historical perspective!

A world-wide move underway, recognizing that the dollar is now unsustainable as a reserve currency, to a new form of reserve currency/currencies, will take some time, and, our dollar will remain as the reserve currency for a while as something new emerges. Regional currencies may evolve in the meantime: Yuan? AMERO? EURO? A worldwide, single, unified currency is too utopian for applicability.

Regional currencies have yet to be proved sustainable either. We are in limbo with a sinking dollar. Geopolitical instability of increasing scope, including at least cultural and resource wars, are in the offing before anything gets settled. Remember the 100 years war?

Indeed, debased currencies and the evaporation of sound money are related to economic and social turmoil. Bankrupt regimes and empires have long attempted to solve the imbalance between their stupendous spending and declining tax revenues by reducing the silver or gold content of their coinage--in other words, "inflating their way to prosperity."

It never worked. Bad money drove out good money, meaning people hoarded gold, silver and sound money and quickly passed off the depreciating "bad" money onto some other sucker.

But the ease of extending this trend in the dollar troubles me. Things rarely turn out as the 97% consensus expects. (By some measures, "dollar Bulls" have been reduced to a near-statistical-noise 3%.)

So let's ask cui bono: who benefits from the collapse of the dollar, and who would benefit from its appreciation?

In general, those with debts to pay would benefit, as debt can be paid with "cheaper" (depreciated) dollars. Those holding the debt would not benefit, as their income would continue to decline in purchasing power.

So the question boils down to this: who holds the debt and assets? Pu another way: who would benefit from the dollar actually rising in value? The answer: the rentier-financial Elites. They're the ones collecting rent and interest payments, and a depreciating dollar is not in their interests at all. The falling dollar benefits those paying down debt (debt-serfs), not those to whom they pay rent and interest.

That the top 1% own 2/3 of the productive assets of the U.S. is simply fact, as is the rising level of income inequality. Please consider this chart:

Note that the last extreme of inequality was reached just before the Great Crash of 1929. The dynamic is this: as the rentier-financial Elite (what I call the Plutocracy) over-reaches , then their share of the national income rises to extremes. Their over-reach creates tremendous imbalances in the financial system, however, which lead to financial crisis.

At that point, the State (central government) places some modest restrictions on the Plutocracy's ability to over-reach (overleverage, fraud, embezzlement, etc.), and income inequality falls.

That the vast majority of the national wealth and income is held by the top 1% of households has been documented in a number of books:

The Rich and the Super-Rich, A Study in the Power of Money Today
(out of print, but used copies are available)
Ferdinand Lundberg

Wealth and Democracy: A Political History of the American Rich
Kevin Phillips

Strangely enough, the mass media presents the Federal Reserve and the Treasury as "in charge" of the dollar's decline. Those agencies certainly control the strings of money supply and liquidity, but who sets their agenda? The bureaucrats? No, the bureaucrats (Bernanke et al.) are hired hands, following an agenda set by others-- those who control concentrations of wealth and thus political power.

From this perspective, the entire outrageous bailout of the financial sector makes perfect sense. Question: who held most of the stock, bonds and other financial assets which would have been rendered worthless had the sector been allowed to collapse? It wasn't Joe Homeowner; some 80% of the financial assets of the nation are owned by the top few percent of households.

So naturally the agenda sent down to the Congress and agency apparatchiks was simple: backstop the horrendous private losses with government (taxpayer) funds. The profits are private but the losses must be socialized/passed to the taxpayers. And so it was done, even as the citizenry pounded their "representatives" with emails running 300-to-1 against the gigantic bailout of the stupendously wealthy.

In The Royal Scam, Anonymous Correspondent suggested the rentier-power Elite could shift their assets out of the dollar and then swoop back in after the devaluation to scoop up the assets for a pittance.

That is a scenario worth pondering, to be sure, as it would solve the Federal Government's massive debt at the same time.

Lastly, we might ask who else internationally might benefit from a rising dollar. How about the Chinese, Japanese and oil exporters who hold dollar-denominated debt?

We might also note that exporting nations desperately want a stronger dollar which then weakens their own currencies, making their goods more competitive in the U.S. market.

If we line up all those who benefit from a rising dollar, we find some reason to anticipate a reversal in the dollar's decline.

Here is a chart of the dollar:

Permanent link: Why The Dollar May Not Be Doomed


I've been invited to join the writers contributing to Seeking Alpha. You can also find my work on AOL's Daily Finance.