Sensitivity to domination, aggression and loss of face run deep in East Asia.

Longtime correspondent Cheryl A. asked me to comment on the dispute between China and Japan over the Senkaku/Diaoyu Islands. I am happy to oblige, as this raises a great number of deeply intertwined issues that are playing out in Asia. 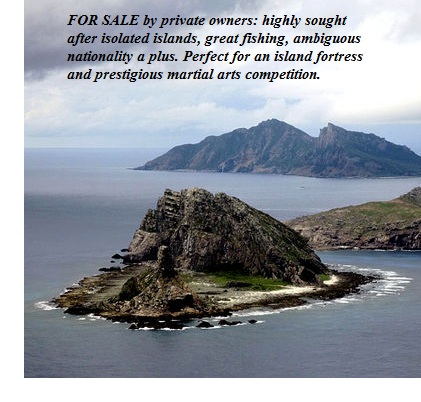 Let's start by noting the "stranger than fiction" absurdity of privately owned islands in ambiguous-nationality waters off China--the scenario of Bruce Lee's classic martial arts film Enter the Dragon. The plot revolves around an ex-Shaolin monk engaged in the drug and prostitution trade who has acquired a private island with murky nationality where he stages martial arts competitions of "epic proportions."

Despite the resemblance to fiction, the dispute is soberingly real, and rooted in chains of events stretching back to 1274 and 1592. Although ostensibly about rights to possible undersea oil/gas reserves, the conflict is about more than territorial or mineral rights.

Japanese fear of Chinese domination can be traced back to the 1200s, when two massive fleets under Mongol leader Kublai Khan attacked Japan in 1274 and again in 1281. The four thousand-ship fleet carrying nearly 140,000 men is said to have been the largest naval invasion in history, eclipsed only in modern times by the D-Day invasion of France (Normandy landings) in 1944. The Mongol fleet was twice dispersed by timely typhoons known in Japan as the "divine wind" (kamikaze).

If you visit Korea, you will notice a curious repetition in the placard descriptions of the historic temples and palaces. Each description includes the phrase, "burned by the Japanese in 1592."

Hideyoshi, the feudal daimyo of Japan, seeking some project to occupy 200,000 battle-hardened samurai and soldiers who had been engaged in decades of feudal-fiefdom warfare in Japan, decided to invade Korea, an independent kingdom that paid tribute to Ming Dynasty China and was within China's sphere of influence.

The Japanese were not kindly conquerors. Not only did they put many of the national treasures to the torch, they destroyed crops, leading to widespread starvation and civilian death, and enslaved thousands of craftsmen who were shipped to Japan.

The Korean Navy managed to limit the invader's sea-supply chain, and eventually the Chinese Ming Dynasty entered the conflict to aid its Korean protectorate. The losses suffered by Korea were catastrophic, and the drain on the Chinese Imperial budget may have contributed to the decline of the Ming Dynasty, which fell in 1644.

There were actually two invasions separated by a brief Chinese-brokered peace. The war finally ended in 1598.

Japanese designs on Korea did not disappear, as Japan annexed Korea as a colony in 1910, a status that lasted until the end of World War II.

Though there is a lively trade between Japan and Korea, it is safe to say that the Koreans have not forgotten the brutal oppression they suffered under Japanese rule from 1910 to 1945, nor have they forgotten the needless destruction and civilian deaths resulting from the Japanese invasion of 1592. Even today, Koreans are second-class citizens in Japan, though you will be hard-pressed to get any official recognition of this reality.

China suffered greatly at the hands of the Japanese during World War II, when Japan invaded and occupied major swaths of coastal and northern China. The senseless, needless massacre of hundreds of thousands of unarmed civilians has been well-documented, though Japanese "Holocaust deniers" claim otherwise. The 1998 account of one city's experience, The Rape of Nanking: The Forgotten Holocaust of World War II, awakened many to the brutality of the Japanse occupation.

Tens of thousands of Chinese civilians were killed by Japanese Imperial Army troops in China as punishment for Chinese aid to the 1942 Doolittle raid flyers who crash-landed in China after bombing Tokyo. The Japanese killed an estimated 250,000 civilians while searching for Doolittle's men.

Though it is not acknowledged, the primary reason American troops remain stationed in Japan is not to protect Japan but to protect its Asian neighbors from Japanese aggression. This is also the reason American troops remain in Germany, 67 years after the end of World War II and two decades after the Soviet Empire collapsed. While the U.S. maintained an extensive military presence in Japan and West Germany as part of its defensive protection of the West from Soviet encroachment, the military presence also reassured nervous neighbors that the U.S. would limit the German and Japanese armed forces and cap those nations' aggressive tendencies.

This is why all the calls in Asia for the U.S. to reduce its presence ring hollow. Not only have people not forgotten Japanese aggression, they also haven't forgotten a thousand years of Chinese domination. The U.S. presence in East Asia reassures everyone in the region that neither Japan nor China will have a free hand to colonize, annex or otherwise dominate the region.

The Chinese people have a chip on their shoulder which they do not even see. The consensus view in China--once again, not spoken publicly, but real nonetheless--is that China's rightful place in the world is at the center (hence the term "middle kingdom," which actually means "center of the world"). Thus the entire world "should" recognize China's natural place at the head of the table, so to speak, and any other nation's resistance to this "natural order" (for example, America's) is seen as "they're trying to hold us back" rather than as an expression of national self-interest.

In other words, to the Chinese, it's always about China: whatever any other nation does, not just in Asia but anywhere on the planet, it's always "they're trying to hold back" China.

This smoldering chip on the shoulder has two sources: the humiliation of the 19th century at the hands of European and American colonial powers (imagine San Francisco being carved up and occupied by foreign nations, and you get a taste of Chinese resentment) and the aforementioned sense of dominance being the birthright of China.

Then there's the Asian focus on "face" that I discuss in China: An Interim Report: Its Economy, Ecology and Future (2005). Apparently The Japanese felt they lost face in last year's kerfuffle between a Chinese fishing boat and a Japanese patrol craft, and so "backing down" on the Senkaku Islands is not a domestic-politics option.

China's leadership, scheduled to change hands later in the year, is keen to avoid any public loss of face as well, as the last thing the leadership wants is any public perception of weakness against "Japanese aggression." One need only read The Rape of Nanking to udnerstand why it doesn't take much to incite mobs to trash every outpost of Japanese commerce within sight.

The Japanese have a peculiarly virulent strain of right-wing militarism that continues to influence domestic politics. In this worldview, reverence for the Imperial household is mixed with an aggrieved sense that Japan's expansion in World War II was justified (though few would say this publicly). As a result, any official Japanese attempt to apologize for the horrendous destruction, murder, enslavement and torture inflicted by Japanese forces in World War II sparks outrage in one sector of the domestic political order.

Deep within this mindset is the view that the only thing wrong with World War II was that Japan lost.

Even more galling to those who suffered so mightily, Japan has refused to publicly acknowledge (though they claim they have) and compensate the "comfort women," young women who were forced into prostitution to serve Japan's armed forces in the Asian/Pacific theater of World War II.

This official dance between apology and refusal satisfies no one, and the general sense outside Japan is that the Japanese acceptance of guilt is grudging public relations rather than sincere.

Combine an obsession with "face" and a plethora of deep-seated resentments, and you get the tinder for territorial disputes. What appears to be lost on the Chinese is the consequence of their saber-rattling and bluster: they appear to have obliterated 20 years of careful diplomacy aimed at convincing their neighbors of China's peaceful intentions.

What seems to be lost on the Japanese is the painful proximity of their World War II brutality in the awareness of their Asian neighbors.

As for solutions: one would hope there is a face-saving way to "engage in peaceful negotiations." If not, then this issue will fester. Though no one wants to state it publicly, there is a role for the U.N. as "honest broker" here, if only the participants can take their hands off their saber handles and practice a bit of honest self-criticism.

Could Asia really go to war over these? The bickering over islands is a serious threat to the regions peace and prosperity. (The Economist)