Having stealthily formed a bottom, the dollar's chart looks like May-July 2008, just before it blasted off.

The obituaries on the dollar are flying fast and furious, but they are premature. Astute reader Robert L. asked for my views on the dollar losing its coveted reserve status in pricing global commodities. It seems to me there is plenty of sound and fury being expended on wild speculations about secret meetings and the looming demise of the once-mighty dollar but precious little illumination.

Rather than focus on "maybe's," let's look at a chart of the dollar from the point of view of basic technical analysis. Charts have the distinct advantage of not even pretending to reflect the fundamentals--whatever they might be.

I have written quite often on the dollar over the years--most recently:
Why The Dollar May Not Be Doomed (September 24, 2009)
Inflation, Commodity Prices and the Dollar (September 29, 2009)

I refer you to three entries I wrote in the March-early August 2008 timeframe for one good reason: the dollar exploded upward in August, gaining 22% in a mere four months. I laid out the case for just such a reversal in these entries:
A Technical Look at the U.S. Dollar's Decline (March 11, 2008)
Has the Faltering Dollar Reached Maximum Pessimism? (May 6, 2008)
How Goes the Dollar? (August 7, 2008)

Notice how the chart in March-July 2008 looks eerily similar to the last few months in the dollar chart. The dollar stumbled along for a miserable five months in 2008 (March - July) before reversing, and the stochastic has been oversold for the past five months.

Negative sentiment also reached an extreme in the 2008 timeframe--and here we are again, with dollar bulls a nearly extinct species, limping along in the single digits (i.e. 91+% are bearish and 9-% are bullish). 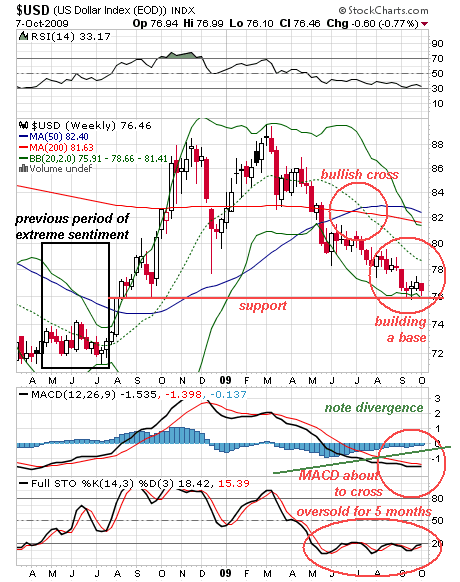 1. Note the previous period of extreme negative sentiment. That 22% rally in the following four months works out to a 66% annualized return.

2. Note the divergence in the MACD and the strong possibility of a positive cross in MACD.

3. Note the five months of oversold stochastics. From one technical point of view, "the bigger the base, the higher the rally."

4. Note key support just below 76. Yes, any support can be broken but notice how price has been basing for four weeks. This could go on for another month or two, as 2008 illustrated, but the stochastic and MACD suggest a reversal is more likely than a crash.

6. The bollinger bands have stopped declining. Price has been hugging the lower band, and since price tends to fluctuate from lower to upper and then back to lower, that suggests a rally to the upper band is likely.

As for fundamentals: As my esteemed blogging colleage Mish noted in Why Would Anyone Want To Hold Dollars?, the crowd that wants the dollar to decline looks smaller than the crowd who wants it stronger.

This was my point in Why The Dollar May Not Be Doomed.

Recall that the Chinese renminbi (yuan) is pegged to the dollar. It could be argued that the Chinese want the dollar to stay depressed (despite their loud public complaints to the contrary) because a weak dollar translates into a weak yuan, which means Chinese goods remain very competitive in the non-dollar economies (Eurozone and Japan).

It could also be argued that the Chinese would welcome a stronger dollar (as would the Japanese) because that would boost the relative value of their immense dollar holdings. Which one is more important to the Chinese? There are probably two camps in the higher reaches of the Chinese bureaucracy, arguing over this same issue.

Amidst all the noise, here is one context to consider. Let's stipulate that the Fed and Treasury are busy devaluing the dollar via endless creation of new dollars. Let's say they've created $2 trillion in new dollars by various means (a guesstimate).

Will printing/creating a meagre $2 trillion really crash a global currency in an environment in which trillions of dollars are needed to pay down debt? And is the U.S. the only nation expanding money supply and credit? Once again, Mish offers an insightful overview in Competitive Currency Debasement - A Look at Rampant Monetary Expansion In China.

Rather than attempt to parse the 3-D chess game that is forex (foreign exchange), let's stick with charts. Regardless of the fundamentals and the "guaranteed" collapse of the dollar, the chart of the dollar looks ripe for reversal.

Let's also recall one of the themes of this site: there is no absolute value, only relative value. The dollar could tank against gold and be rising against one currency even as it drops against another. The way to increase purchasing power is to be on the right side of a trade which is about to reverse big-time.

Disclosure: I may buy on some UUP (US dollar Bullish ETF) in the near future.

I've been away from my desk for a week so I apologize for the tardy email responses.


Check out my article in American Conservative Magazine No Easy Money: The case for raising interest rates.